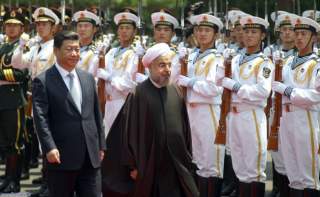 On Thursday April 2, the political framework for a final comprehensive agreement on Iran’s nuclear program was finally agreed to. In anticipation of potential future sanctions relief, China took a number of immediate steps to secure its trade and energy interests in Iran. While Iran welcomes this, it is still wary of Beijing’s efforts.

As European and US sanctions were tightened, Iran increasingly turned to Asia to weather their impact. Despite efforts to coax Beijing away from Tehran, Washington was forced to repeatedly renew US sanctions waivers for China as Beijing continued to import oil from Iran. In fact, according to the International Energy Agency, Chinese purchases of crude oil in January 2014 boosted Iranian exports to 1.32 million barrels per day; 32% above the limit allowed by the November 2013 agreement with the P5+1. Clearly, China was anticipating more permanent sanctions relief and wanted to be ahead of the curve.

Iran is at the heart of a number of key Chinese strategic interests, including greater and more diversified supplies of energy, building a “Silk Road” connecting the Middle East to China via Central Asia, and increasing its influence in the region.

As a result, energy and trade are not the only areas of cooperation between the two countries. China and Iran’s defense cooperation through Chinese sales of advanced defense technologies, and assistance with Iran’s ballistic missile program, spans three decades. In May 2014, Chinese Defense Minister Chang Wanquan announced a desire for closer military cooperation with Iran during a rare and very public four-day visit to Beijing by his Iranian counterpart, Hossein Dehqan.

(Recommended: How China Sees Iran and the Nuclear Negotiations)

But Iranians are suspicious of the Chinese. They know their relationship is mainly one of convenience. They question whether Beijing would have taken such an active economic role in the Islamic Republic if it weren’t for the hole left by Western sanctions and Beijing’s gaping energy needs. Iranians also dislike the lack of Chinese economic and political investment in the markets they exploit. In April 2014, Iran cancelled a US$2.5 billion contract with the China National Petroleum Corporation (CNPC) for the development of the South Azadegan oil field after repeated delays in the project. Iranian officials complained about the poor quality and high cost of Chinese equipment and services.

What’s more, the reasons for China’s withdrawal from existing contracts in the oil and gas sector remain. The sanctions regime is still in place. Chinese businesses are still fearful of the impact of business with Iran on their business with the US. Iranian money is still held up in Chinese banks. Should there be a final agreement in June, their undoing will be painfully slow. The prospect of either suspension or potential “snap-back” provisions will make businesses fearful of jumping into Iran.

But China’s lack of political motivation in business decisions and its existing presence in Iran makes it an attractive partner moving forward. Once again, China wants to be ready should a final agreement be signed.

Just a week after the announcement of the framework agreement, Iranian energy officials went to Beijing to discuss boosting Chinese purchases of oil and investment in the sector in Iran. While Iran is hopeful it can attract European firms particularly in LNG development and technology, it looks to Sinopec and CNPC for developing gas in the South Pars fields and oil in Yadavaran and North Azadegan. China also reportedly agreed to build a pipeline designed to transport Iranian gas to Pakistan. While the project was put on hold because of sanctions, which have yet to be removed, Pakistan is keen to make progress so that the pipeline can be connected as soon as the ban on Iran’s energy exports is lifted.

China also wants Iran integrated into Asian multilateral organizations—perhaps in an effort to entice them East. Beijing (and Russia) offered to back Iranian membership of the Shanghai Cooperation Organization (SCO). This week, China announced that Iran would become a founding member of the Asian Infrastructure Investment Bank (AIIB)—its response to the World Bank. This could help legitimise and facilitate business between both countries. Next month, Premier Xi will pay his first official visit to Tehran. He will be the first Chinese president to go to Iran after 13 years.

China is well paced to reap the benefits of the Iranian economy opening up. Not only did it continue to operate there while others were squeezed out, but it took concrete steps to firm up its commitments as soon as the framework agreement was announced. Much like after the announcement of the interim deal. Iran welcomes the interest, both for economic and political reasons. But Iran’s partner of choice is the West—that’s why it got into the negotiations in the first place.

Image: Office of the President of Iran.