Iraq Might Purchase Russia's Most Powerful Air Defense System Ever 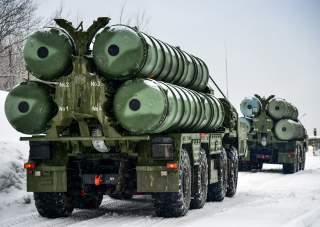 Iraq is considering the purchase of Russia’s potent S-400 air and missile defense system. However, there has been to firm decision in Baghdad to proceed with a purchase just yet.

"There is no delegation in Moscow now to purchase S-400," Iraqi Ambassador to Russia Haidar Mansour Hadi told reporters according to the Russian TASS news agency.  "When the Iraqi government decides to buy S-400, of course, this will be announced, and the issue will be discussed by the two countries.”

However, Iraq is apparently studying a potential S-400 buy as it rebuilds its conventional military capabilities as it mops up the remnants of the ISIS terrorist group on its territory. "The issue is being studied in every detail," Iraqi Foreign Minister Ibrahim al-Jaafari told reporters in Moscow according to TASS. "All necessary decisions aimed at strengthening Iraq will be made after that."

What followed was complete chaos—and Iraq has yet to recover from the ill-advised U.S. invasion.  "Unfortunately, Iraq sustained substantial losses in the fight against terrorism," al-Jaafari said. "Today we are ready to take any steps that will ensure our security."

Iraq remains a troubled nation, despite its recent victory over ISIS forces. There are still deep divisions with the country and there is still no long-term resolution of the Kurdish situation in the north of the country. However, Iraq will probably eventually stabilize to some degree over the next several years.

But while the ISIS threat might have abated, the Iraqis still live in a dangerous neighborhood. Thus, Baghdad will eventually have to rebuild its conventional forces to guarantee its security and territorial integrity. As such, the Iraqi government will eventually have to buy more advanced conventional weapons to deter its neighbors. The S-400 and other air defense weapons would address at least some that requirement.

That being said, Iraq will take time to recover. Thus, a S-400 purchase is not imminent.