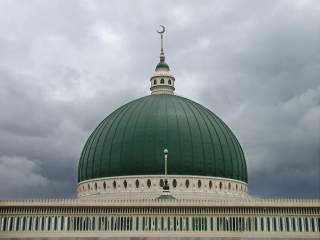 Militants with ties to the Islamic State have taken control of a city in the southern Philippines.

The attempt to capture Hapilon tipped over the hornet’s nest.

The militants took over government buildings, raising their flags. Rebel fighters torched churches and schools, freed over one hundred inmates from two local prisons, and took hostages. They also beheaded the Philippine police chief, according to multiple reports. The police chief was reportedly stopped at a militant checkpoint and executed.

There are also unconfirmed reports that the militants slaughtered civilians, binding their hands together and gunning them down in a field. The militants are believed to have murdered at least 11 civilians.

Thousands of people are fleeing the city.

Marawi is located in Lanao del Sur province on the southern island of Mindanao, a hotbed for Islamic insurgencies and a stronghold for Maute and other ISIS-linked organizations. There are only around 30 gunmen, but they are moving quickly through homes, planting bombs in the streets, hiding snipers around the city, and taking hostages, complicating the situation.

“We are in a state of emergency,” President Rodrigo Duterte said in response to the growing crisis in the southern Philippines, “I have a serious problem in Mindanao and ISIS’ footprints are everywhere.” The president has declared martial law in Mindanao, the first time since the 1980s.

The military is conducting surgical air strikes against militant targets, and ground troops are moving in to liberate the besieged city and eradicate the extremist invaders. “The military is conducting precise, surgical operations to flush them out, ” military spokesman Col. Jo-Ar Herrera told reporters. “The situation is very fluid and movements are dynamic because we wanted to out-step and out-maneuver them.”

The White House has condemned the violence in the Philippines, calling the militants “cowardly terrorists” who “killed Philippine law enforcement officials and endangered the lives of innocent citizens.” The U.S. has said that it will offer “support and assistance to Philippine counterterrorism efforts.”

Army tanks and troop carriers have rolled into the city.