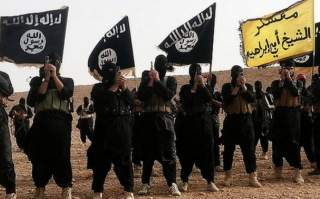 In an excellent exploratory piece by Graeme Woods in The Atlantic this month, he notes in passing the similarities between ISIS and the Khmer Rouge. It’s a worthy comparison – further highlighted by ISIS’ destruction of antiquities as reported last week – and something that merits a deeper look.

In the 1960s and 70s, communism was arguably the Western world’s equivalent to today’s global battle with Islamic jihad. Its scourge and spread in the midst of the Cold War kept U.S. and European policymakers awake at night. One of the groups that emerged under the broad guise of communism was the Khmer Rouge.

A regressive and genocidal regime, the Khmer Rouge seized upon the anger of Cambodians following a brutal U.S. bombing campaign. That campaign, from 1965 to 1973, flew 230,516 sorties and dropped 2,756,941 tons of ordnance on Cambodia (more than the Allies dropped during the entirety of World War Two). The bombing campaign, of which over 10 percent was on indiscriminate sites, was aimed at destroying mobile Viet Cong bases in eastern Cambodia. The environment of anger that the campaign fermented gave way to a coup d’état in 1970, followed by the Khmer Rouge seizing power in April 1975.

As a 2006 paper by Taylor Owen and Ben Kiernan noted, “despite many differences, a critical similarity links the war in Iraq with the Cambodian conflict: an increasing reliance on air power to battle a heterogeneous volatile insurgency.” Just as in the case of Cambodia, that heterogeneity in Syria and Iraq has given way to a calcified homogenous and territorially-bound group.

In one of their first acts, the Khmer Rouge emptied Phnom Penh and forced the capital’s residents on a long and deadly march into the countryside to work rice fields. Torture and execution were central to their brutal grip on power. As Kiernan explains, Cambodians “quickly learnt that any display of knowledge or skill, if ‘contaminated’ by foreign influence, was folly.”

At the forefront of the Khmer Rouge’s ranks were thousands of indoctrinated youth who were to usher in “Year Zero.” At the base of the Khmer Rouge’s genocidal regime was a mix of ideological agrarian socialist utopianism and a desire to reinstate the glory years of the 12th Century Khmer Empire. Pol Pot, a self-proclaimed leader, found an opportune moment in the Cold War, playing the great powers and capitalizing on public discontent, to build his ranks then seize and maintain power. His genocidal reign was short but destructive.

There’s much similarity to be gleaned from Pol Pot’s genocidal regime that parallels with ISIS today.

Aside from obvious similarities that will be noted from the above, both groups subscribe to the destruction of a collective memory in place of a favored revisionist other. In effect, both are anti-progress. Reminiscent of the Khmer Rouge’s “Year Zero” concept is the recent footage of ISIS destroying ancient artefacts in Mosul and Nimrud (despite having profited greatly from the smuggling of other antiquities).

Anti-progress movements (whether religious or ideologically driven) are nothing revolutionary. The very nature of progress gives birth to counter-movements – the Luddites, for example, destroyed machinery during the 19th Century Industrial Revolution. These groups thrive in periods of change, such as the incredible social and technological upheaval that has marked this new century.

Anyone who has walked Cambodia’s Killing Fields or S-21 prison should need little reminding of the urgency for action against genocidal groups. In the three years, eight months and 20 days of the Khmer Rouge’s power, an estimated 1.7 million people died. That number, among the most conservative of estimates, equated to 21 percent of the population. The long tail of that civil war lasted until 1998. Yet, unlike Pol Pot’s Cambodia, which financially ran itself into the ground, ISIS has riches and resources far beyond.

Elliot Brennan is a Non-Resident Research Fellow with the Institute for Security and Development Policy's Asia Program in Sweden. This piece originally appeared on the Lowy Interpreter.