Is Israel Turning Against the F-35? 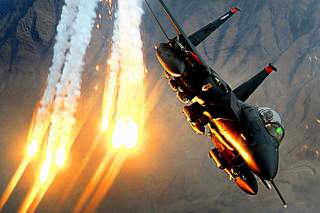 Even as Israel activates its first F-35 squadron, the Israeli Air Force may be opting for an older aircraft for its next fighter purchase.

Instead of more Lockheed Martin F-35s, the Israeli Air Force is about to recommend acquiring more Boeing F-15I aircraft, according to Israeli newspaper Haaretz.

“The Israel Air Force is to decide in a few months between purchasing a third squadron of F-35 fighter jets or the F-15I, which, while less advanced, has other advantages,” Haaretz reported. “The acquisition requires the approval of the General Staff and a ministerial committee, but the recommendation of the air force generally carries the day.”

So what will replace them? “The F-15, though older, has two advantages over the F-35: a longer flight range and the ability to carry larger bombs,” Haaretz reports. “Another factor in its favor is that it’s built on a different platform, which means the air force would have a mix of planes rather than relying on a single model.”

Interestingly, while American critics have scorched the F-35 program over its $1.4 trillion cost, the issue for Israel isn’t the price tag. “The F-15I is also cheaper to operate than the F-35,” says Haaretz. “But the plane is currently being upgraded by the manufacturer, Boeing, and its purchase price is expected to rise in any future deal. Thus it could end up costing the same as the F-35 does next time around.”

More important, Israel may buy more F-35s. The question is when. “The argument within the air force apparently isn’t over whether a third F-35 squadron is needed, but over how soon it is needed,” Haaretz notes. “Proponents of the F-15 prefer to postpone buying the third F-35 squadron until near the end of the next decade.”

The IAF’s eventual decision will certainly interest Lockheed Martin and Boeing. An Israeli purchas of additional Strike Eagles would keep open the production line for F-15s, which is currently scheduled to remain open through 2022. Boeing spokeswoman Marcia Crossley would not confirm whether Israel and Boeing are in talks, but she did tell the National Interest that the company “stands ready to support our longtime and valued customers in Israel with the most capable air superiority aircraft in production today so they can meet their current and future defense needs.”

Even if Israel foregoes or delays buying a third squadron of F-35s, a dozen or so aircraft won’t make much of a dent in the F-35 program, which will comprise about three thousand aircraft for U.S. and foreign customers. However, the Israeli move comes as critics continue to blast the F-35 for its hundred-million-dollar price tag per aircraft, and when even the Pentagon admits that capabilities that have yet to match promises. The fact that Israel might opt for the Cold War–era F-15E, which first flew in 1986, doesn’t bode well for the troubled stealth fighter.