Israel vs. Hamas, Round Three: What Comes Next? 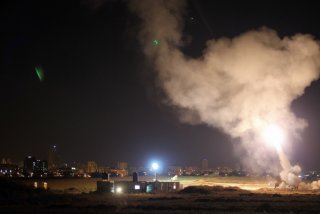 For the third time in less than six years, violence directed towards Israeli civilians from Palestinian militant groups in Gaza has forced the Israel Defense Force to plan and execute a coordinated and large-scale operation in the coastal enclave.  The latest operation, initiated in the early morning hours of July 8 and codenamed Operation Protective Edge, is nearly identical to the IDF’s Operation Pillar of Defense in November 2012.  However, the intensity of Israel’s current campaign over the first three days—and the countermeasures Hamas has taken—are far more persistent than the eight-day air campaign over Gaza twenty months earlier.

Over the first seventy-two hours of Protective Edge, the Israeli air force has struck approximately 1,752 sites that the army has labeled “terror targets.”  On July 10 alone, the IDF successfully hit 210 targets either affiliated with the Hamas movement or connected to any number of smaller Palestinian militant factions—such as the Islamic Jihad group—in the strip.  The length and scope of Israel’s targeting list, including command-and-control nodes, underground tunnels, rocket launching sites, individual militant commanders, and the homes of senior Hamas or Islamic Jihad members is a robust illustration of how extensive the government’s offensive is.

Despite the sheer animosity that Israel and Hamas have for one another’s existence, both sides appear to understand that a further escalation of the situation along the Israel-Gaza border could result in a far more unpredictable and uncontrollable situation.  Having experienced a high number of condemnations from the international community over its January 2009 ground offensive in Gaza, the IDF neither desires to mimic the past military plans, nor does it wish to send Israeli combat soldiers into a densely populated and hostile environment.  Hamas, regardless of its public statements and propaganda, is ill prepared for a massive Israeli ground operation in its stronghold, having seen its smuggling tunnels sealed off from the new Egyptian Government of President Abdel Fattah el-Sisi.  Israel’s vastly superior military capacity assures that Hamas will lose a significant portion of its military prowess and capability in the event of a ground incursion.  Each party is most likely searching for a way out of the current conflict, with the reinstatement of a ceasefire terminating the rocket fire and airstrikes the most obvious solution.

In the absence of a game-changing event such as a rocket or airstrike that claims dozens of lives simultaneously, a cessation of hostilities between Israel and Hamas is still the most plausible option at this point in the conflict.  Although Hamas firmly rejected Egypt’s ceasefire proposal, calling it a “joke” not worth the paper it was written on, the group will have an incredibly difficult time withstanding an expanded Israeli military campaign for weeks on end.

A cessation of hostilities, depending on the terms being offered, is still in the interest of both Israel and Hamas; both want calm, and have no interest in a full blown war that lasts for weeks or months on end. It’s a pattern that observers of the Israeli-Palestinian conflict have known all too well since 2009:  a period of intense rocket fire and airstrikes eventually produces an arrangement that produces a relative degree of deterrence for both sides.  Unfortunately, it is also a likelihood that any calm produced by a cessation of hostilities will be capitalized by Palestinian militant groups in Gaza--all of which will try to recuperate from their losses and prepare for the next round of fighting.

Without a long-term ground offensive and re-occupation of Gaza that the IDF is unwilling to unleash, the Israel-Hamas standoff will continue in the same way that it began: cyclically, where quiet along the border is at times interrupted with unpredictable and deadly violence, before quiet is restored again.