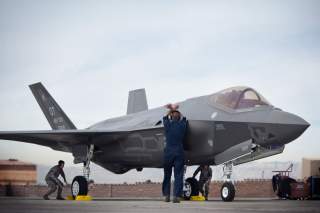 Israel is practically a launch customer for the American-designed F-35 stealth fighter. The Jewish state plans on declaring its first squadron of the radar-evading jet combat-ready by the end of 2017.

That’s just two years after the U.S. Marine Corps’ declaration of war-readiness for its F-35s — and one year later than the U.S. Air Force’s own planned introduction of the new plane.

And Israel’s F-35s will be unique. While most foreign customers of the stealth fighter plan to operate fairly standard F-35s, Tel Aviv is heaping its own special tech onto the airframe.

And that’s not the only way in which Israel’s F-35s will be unique. The country should also possess a regional F-35 monopoly for at least a decade after bringing the stealth fighters into service.

Israel has a long tradition of adding unique hardware and software to jet fighters it acquires from abroad. With their fuselage-mounted fuel tanks, enlarged spines for housing avionics and other additions, Israeli air force F-16s are distinctive compared to their more mundane American counterparts.

With U.S. approval, the Israeli F-35I will possess a locally-designed command-and-control system that adds to the plane’s existing capabilities. On April 3, Israel Aerospace Industries announced that it had completed testing of the new add-on, which amounts to a software-driven radio interface that Benni Cohen, an IAI manager, described as being similar to a smartphone app.

“It’s open architecture, which sits on the F-35’s central system, much like an application on your iPhone,” Cohen told Defense News. “It paves the way for additional advanced capabilities to be embedded in the F-35I in the future.”

Meanwhile, Israeli firm Rafael told Jane’s it would add its Spice-1000 precision-guided bomb to the F-35I. The Spice-1000 adds a guidance kit and pop-out wings to standard 1,000-pound bombs, giving them the ability to strike targets as far as 60 miles from the launching aircraft.

Moreover, Israel’s F-35s will not be wedded to the Autonomic Logistics Information System, a global network of data-sharing that F-35-builder Lockheed Martin is developing in order to coordinate maintenance and upgrades for most of the world’s F-35s.

Instead, the United States is considering authorizing Israel to repair its F-35s and their engines at its own depots.

And Israeli F-35s will be special in one other very important regard. While Lockheed and the U.S. government specifically designed the F-35 to be widely exportable, Washington has vowed not to sell the F-35 to Israel’s Middle East neighbors, essentially handing Tel Aviv a stealth-fighter monopoly … for a while, at least.

“Right now, we do not have any expectation for selling the F-35 in the near term, beyond the countries that have already bought into the program,” Bob Work, the U.S. deputy defense secretary, told Defense News in response to a query about potential F-35 sales to Arab countries.

Instead, Washington has been pushing upgraded older-model fighters in the Middle East — and recently signed off on sales of F-15s to Qatar and F/A-18s to Kuwait. Saudi Arabia is also buying factory-fresh F-15s, while Iraq is acquiring F-16s.