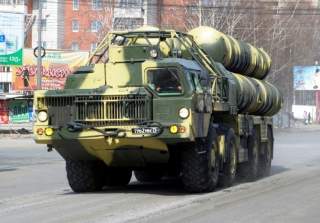 Russia has reached a new agreement with Iran to supply that nation with the S-300 integrated air defense systems. News of the sale comes after Iran reached a deal to curtail its nuclear program in exchange for lifting economic sanctions.

Under the new deal, Moscow will supply a version of the powerful surface-to-air missile system to Tehran, but which version of the weapon is not clear. Nor it is clear how many batteries the Iranians are buying. However, Russian officials say that a contract has been signed and is being implemented. “The contract on S-300 systems has been signed,” Sergey Chemezov, chief executive officer of RosTec told the TASS News agency in Dubai. “I believe that Iran will withdraw its claims to us, when the first part [of the contract] is completed.”

Iran is suing Russia over a previous $800 million sale in 2007 of five battalions worth of the S-300PMU-1 missile systems in the International Court of Arbitration. Moscow suspended that deal in 2011 after the United Nations Security Council imposed sanctions on Iran over its nuclear activities. Now that a deal has been reached, Russia is planning to deliver the weapons. Given that the original deal called for the sale of five battalions worth of missiles, the new deal is likely similar in scope.

Iran originally contracted for the S-300PMU-1, but that version of the weapon is out of production. As such, Iran will either have to buy a new version of the system or existing hardware in Russia’s current inventory might be upgraded for sale. “Much time has gone by and the S-300 system has changed, so we’re working on the modernization of the system,” said Rosoboronexport general director Anatoly Isaikin according to Russian state-owned media outlet Sputnik.

Manufacturer Almaz-Antey still builds the S-300PMU-2 Favorit and the S-300VM—also known as the Antey-2500. Both have a range of more than 120 miles and can hit targets as high as 100,000ft. The weapons can engage half-a-dozen or more targets simultaneously. Either version of the weapon is extremely capable and could render entire swaths of Iran nearly invulnerable to attack via conventional strike aircraft.

Only the Lockheed Martin F-22 Raptor, F-35 and Northrop Grumman B-2 Spirit stealth bomber would be able to operate inside areas protected by those weapons. But even those aircraft could be challenged if there were enough S-300 batteries operating as part of an integrated air defense network.

The exact number and location of the S-300s would make a huge difference. The problem is further compounded by the fact that the S-300 system is mobile—and can move at a moment’s notice. “If they’re all over every square inch of the country, then it doesn’t matter what you put out there—it’s going to be a challenge,” a senior Air Force official with extensive stealth experience told me earlier in the year.