Is It Ever Really Appropriate to Use Nuclear Weapons? 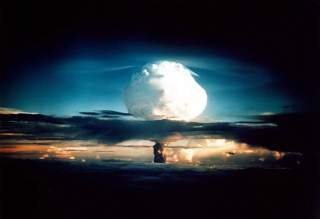 Nuclear weapons have important roles in peacetime and in crises. But let’s turn to what Senator Singh was probably really asking: in what circumstances would Australia think it appropriate to resort to the direct use of nuclear weapons?

In Senate estimates last week, Senator Lisa Singh raised with representatives from the Department of Foreign Affairs and Trade the issue of possible use of nuclear weapons. ‘In what circumstances’, she asked, ‘does the government’s security doctrine anticipate that using nuclear weapons would be appropriate?’ The breadth of the question seemed to catch DFAT by surprise. For one thing, Australian declaratory doctrine—as set forth in various defence white papers—doesn’t really address the issue of direct use. And, reasoning from first principles, the question seems to invite either an overly simplified answer or an overly complicated one. The simple answer, of course, is that use of nuclear weapons is appropriate when vital interests are under threat and conventional weapons don’t suffice. DFAT’s Richard Sadleir gave a variant of that answer by saying that extreme emergencies of a self-defensive nature constituted the appropriate circumstances. But I think the more complicated answer should also be rehearsed.

First, let’s clarify what ‘use’ of nuclear weapons actually means. This is, after all, a class of weaponry typically associated with deterrence, which means that ‘use’ mostly occurs as ‘threats to use’; weapons are rattled rather than fired. The flagging of nuclear options is intended to constrain adversary behaviour during crises. That’s an infrequent, but important part of modern great-power relations. Moreover, Australian declaratory policy endorses this form of use—see paragraph 5.20 of the 2016 Defence White Paper, for example. Coercive threats to use nuclear weapons usually occur when large stakes are involved—as they were in the Cuban Missile Crisis. And the stakes of war, Raymond Aron once wrote, are the existence, the creation and the elimination of states. Considerations of that magnitude typically underpin such threats.

But reliance upon threats to use rather than actual use is only one form of the ‘gravitational use’ of nuclear weapons. I’m using the term ‘gravitational’ here in the same sense that Robert Art uses it in his essay on the fungibility of force:

Nuclear weapons are particularly suited to gravitational use. Indeed, nuclear threats are usually implicit rather than explicit. They sit in the background, and exercise their effects from there. In this broad sense, nuclear weapons have been ‘used’ every day since their invention.

Some analysts write as though direct use of nuclear weapons signals an end of deterrence. It doesn’t. Rather, it puts increased emphasis on what’s called ‘intra-war deterrence’: even when the nuclear threshold has been crossed, both adversaries have strong interests in damage-limitation and war-termination, and are thus ‘deterred’ from open-ended escalation.

Now we come to an important part of the issue: some might think that Australians would approve of direct nuclear use only in the event that Australia itself were being threatened. I don’t think that’s true. Australian security is shaped heavily by the global strategic order. And that order is principally determined far from our shores—typically in the critical force balances around the Eurasian rimlands and between the world’s great powers. Direct use of nuclear weapons in relation to those strategic balances is much more likely than it is in relation to, say, defence of the Australian continent. That’s why US extended nuclear assurances to NATO countries, and to Japan and South Korea, tend to be more explicit than they are to Australia.  So, would we think that use of nuclear weapons was appropriate in relation to serious threats to the vital interests of the US or its other allies? It would depend on the circumstances, of course, but the answer’s probably ‘yes’.

I’m aware none of that makes for pleasant reading. We’re talking here about extremely serious strategic challenges—the sort that, in the past, have provoked world wars. The threat of nuclear war has done much to hold such a prospect at bay. Since nuclear weapons are probably going to be with us for some decades yet, Australia’s interests lie in responsible nuclear powers, good stewardship of nuclear arsenals, and adroit diplomacy in crises—including crises where the threshold is crossed.