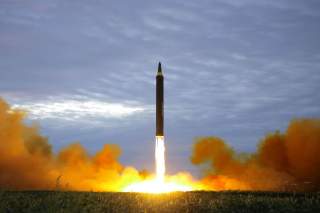 Pyongyang has not only continued with missile tests, but also publicly vowed to destroy Guam with nuclear weapons if the United States uses force against it. The omens of war on the Korean peninsula loom larger by the day.

Recent missile and nuclear tests have returned the North Korean nuclear issue to the centre of international attention. According to analysts, these tests demonstrate that Pyongyang not only possesses nuclear weapons, but also missiles that can reach the west coast of the United States. It should not be long before North Korea develops the capability to miniaturise its nuclear weapons and fit them to its intermediate and long-range missiles.

As predicted, the US reaction was quick and strong. President Donald Trump threatened that the United States will rain ‘fire and fury’ upon North Korea if it is to attack.

For China, this turn of events has heightened the urgency of addressing the North Korea nuclear issue. Among other things, it has increased the likelihood of a US pre-emptive strike against North Korea. And, even if the United States refrains from doing so, harsher sanctions as well as more frequent and larger military exercises are on the cards. In turn, this would sharply increase the chances of a military conflict and of a crisis erupting in North Korea.

China has already stepped up its efforts to implement UN sanctions against North Korea. Importantly, Beijing has suspended coal imports from North Korea, which is generally believed to be a key source of Pyongyang’s income. China hopes that North Korea will see the light and accept China’s ‘two suspensions’ proposal, meaning that North Korea would suspend nuclear and missile tests in exchange for suspension of joint US–South Korea military exercises. Beijing believes this is the only way to cool down the situation and pave the way for resuming dialogue and negotiation between the two sides.

But North Korea has largely ignored China’s efforts. Pyongyang has not only continued with missile tests, but also publicly vowed to destroy Guam with nuclear weapons if the United States uses force against it. The omens of war on the Korean peninsula loom larger by the day.

When war becomes a real possibility, China must be prepared. And, with this in mind, China must be more willing to consider talks with concerned countries on contingency plans.

The United States and South Korea have long tried to persuade China to hold talks on contingency planning. So far Beijing has resisted the idea for fear of upsetting and alienating Pyongyang. But, given recent developments, Beijing may have no better choice than to start talking with Washington and Seoul.

In any such talks, the first issue that Beijing may wish to talk about is who would control North Korea’s nuclear weapons arsenal. After all, these weapons are too dangerous to be left in the hands of a North Korean army caught in political chaos.

On the one hand, China may not be opposed to the idea that the US military do the job since this would prevent proliferation. North Korea’s nuclear weapons are of no technological value and it would be very costly to take care of them.

On the other hand, China may have a problem with the US military crossing the 38th parallel, reviving memories of the Korean War in the early 1950s. On balance, China may wish to take care of the nuclear weapons itself. The United States may accept this for the reasons of non-proliferation and cost. The US does not have the same historical baggage against the Chinese military taking such actions in North Korea.

The second issue Beijing might wish to talk about is how to deal with the expected refugee problem. Beijing may accept the suggestion that the People’s Liberation Army march across China’s border with North Korea to create a safety zone in order to build shelters for refugees and stem a massive refugee inflow into China’s northeast.

The third issue Beijing may wish to talk about is who is to restore domestic order in North Korea in the event of a crisis. The South Korean forces? The UN peacekeeping forces? Or some other forces? China would probably object to US forces doing the job because that would require the US military crossing the 38th parallel.

The fourth issue Beijing may wish to discuss is the post-crisis political arrangements of the Korean peninsula. Should international society set up a new government for North Korea? Or should it endorse a UN-sponsored peninsula-wide plebiscite on reunification in preparation for a united Korea?

Finally, Beijing may also wish to talk about the removal of the Terminal High Altitude Area Defense (THAAD) system from the peninsula when Pyongyang’s nuclear program is gone. Beijing believes that the system undermines China’s security and has urged the United States and South Korea to remove it. Washington and Seoul are likely to accept the idea. After all, both have repeatedly claimed that the deployment of the THAAD system is nothing more than a response to North Korea’s nuclear and missile programs.

As before, China does not wish to face a crisis situation in North Korea because it threatens a nuclear war, political turmoil, a massive refugee problem and other unpredictable negative consequences. But as the situation on the Korean peninsula deteriorates, China has no alternative but to get prepared.

Jia Qingguo is Professor of diplomacy and international relations and Dean of the School of International Studies, Peking University.