Is It Time for U.S. Aircraft Carriers to Visit Taiwan? 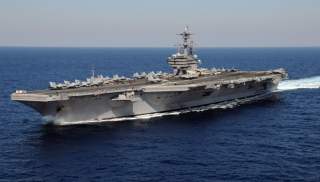 The People’s Republic of China denied permission for the carrier to make its long-scheduled visit to the former British colony following the vessel’s operations in the South China Sea—which Beijing claims as its own.

“As Beijing's direct control of Hong Kong intensifies, the U.S. Navy should strongly consider shifting its carrier port calls to more stable and welcoming locations,” said Rep. Randy Forbes (R-VA), chairman of the House Armed Services Seapower and Projection Forces subcommittee in a May 2 statement. “While China finds profit in needlessly harming our sailors' families, many U.S. allies and partners in the region, including Taiwan, would no doubt welcome our carriers and their crews with open arms. The time has come to consider these alternate locations going forward.”

The U.S. Navy routinely visits Hong Kong—and as such—Beijing’s denial of permission is likely a signal of China’s discontent with the U.S. Navy enforcing Washington’s right to freely navigate in the region. Beijing has previously denied visitations during times of heightened tensions. In 2007, China denied permission for USS Kitty Hawk (CV-63) to visit the port city following a dispute over arms sales to Taiwan.

“China has repeatedly politicized the long-standing use of Hong Kong for carrier port visits, inconveniencing the families of thousands of U.S. sailors and continuing a pattern of unnecessary and disruptive behavior,” Forbes said.

The Pentagon, for its part, has said that it wants to reduce tensions in the region—especially as China continues to make new claims in the area. Indeed, there are new fears that China will begin land reclamation activities in the Scarborough Shoal, which is also claimed by the Philippines.

“We want to reduce tensions, but we also want everybody in the region to be able to rise and develop in their own way,” U.S. Secretary of Defense Ashton Carter told reporters onboard Stennis on April 15. “The only reason that question even comes up is because of what has gone on over the last year, and that's a question of Chinese behavior.  So, what's new is not an American carrier in this region.  What's new is the context of tension which exists, which we want to reduce.”

Carter reiterated that the United States’ is not supporting any one nation’s claims in the region. “In international affairs, disputes should be resolved peacefully, and not by changing the status quo unilaterally.  And we're against that by any of the claimants,” Carter said. “And a number of the claimants have done that, and we've opposed that.  By far and away over the last year, the most has been done by China.”