It's Official: U.S. Aircraft Carrier Kitty Hawk Will Be Dismantled 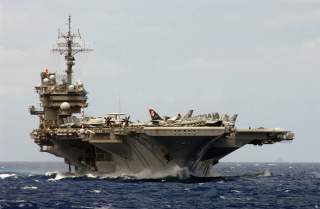 The USS Kitty Hawk will die the way she lived: coming apart at the seams.

Despite speculation that the beloved “Battle Cat” might return to service, the first and last conventionally powered aircraft carrier of its class will be “disposed of and dismantled” after eight years in limbo following its decommissioning in 2009, Naval Sea Systems Command spokesman Colleen O’Rourke told the Kitsap Sun on Oct. 24.

Last June, Naval Sea Systems Command Vice Adm. Thomas Moore had floated the idea of reactivating the 82,000-ton supercarrier alongside an armada of Perry-class frigates to meet Navy’s daunting goal of boosting its 275-ship fleet to 355 hulls. But it wasn’t meant to be: O’Rourke this week cited the Navy’s April 2016 report to Congress on shipbuilding operations that identified the Kitty Hawk as a prime candidate for the scrapyard (NAVSEA did not immediately respond to request for comment).

The move isn’t a huge surprise. In an interview with the Kitsap Sun just last week, Secretary of the Navy Richard V. Spencer hinted that there was little hope for a reprieve for the aircraft carrier. “The business case for the Kitty Hawk would be a fairly big stretch,” Spencer said. “The only project that we have that has some activity going on is bringing back the Perry-class frigates, possibly.”

Kitty Hawk earned her stripes across 18 deployments from the Vietnam War to the 2003 invasion, but the aircraft carrier earned a less-than-flattering nickname during her 48 years at sea: “Shitty Kitty,” a fond if exasperated moniker for a vessel plagued with mechanical breakdowns and maintenance issues.

One Navy vet put it best in Richard Miller’s A Carrier at War: On Board the USS Kitty Hawk in the Iraq War: “This boat’s old. Old pipes, too many coats of paint, too many welds and re-welds. She’s been around too long. Lots of sailors don’t like her. She’s a pain in the ass to clean and too damned expensive to run.”

But despite its reputation as a “punishment ship,” the Kitty Hawk and her crew served the Navy admirably for nearly half a century. And for that, we salute you, Shitty Kitty. You were a mess, but you were our mess.