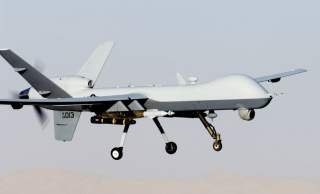 For some 20 years, the U.S. Air Force has set the standard with respect to creating and operating unmanned aerial systems (UAS). Overcoming its initial reluctance to employ this novel platform, the Air Force now operates the world’s largest fleet of UASs.  It successfully evolved this new capability from the medium altitude, long-endurance RQ-1 Predator, a propeller-driven, ISR platform, to the jet-powered, armed MQ-9 Reaper. In addition, the Air Force invested in several variants of a high altitude, long-endurance capability, the RQ-4 Global Hawk, one of which is scheduled to replace the venerable and highly successful U-2 reconnaissance aircraft.

The demands of multiple evolving conflicts required the Air Force to develop technical requirements, operating concepts, sustainment schemes and approaches to manning essentially on the fly. The nearly insatiable desire of the combatant commanders for Predator/Reaper support resulted in an explosion not only in the number of platforms, but also in operators, maintainers, other support personnel and intelligence analysts. Former Secretary of Defense Robert Gates set a requirement on the Air Force for 65 Predator combat air patrols (CAPs) requiring more than 300 platforms and thousands of personnel. At the same time, sensor technologies were continually improving, creating a demand for better power and communications systems aboard Predators and Reapers and, in turn, more powerful engines and advanced avionics. As a consequence, it was extremely difficult to establish a standard platform configuration, adding to operational complexity and the costs of sustainment.

Even as the Air Force strives to meet the capacity requirements created by increasing global demand for UAS support, it needs fresh thinking regarding desired future capabilities. It is apparent that the struggle against violent jihadists such as ISIS will ensure an ongoing need for the kind of ISR and strike capabilities resident in the Reaper. But both the Reaper and Global Hawk can operate only in so-called permissive air environments. The growing threat to current UASs due to the proliferation of air defenses and the creation by regional powers of integrated anti-access/area denial networks will necessitate development of new platforms and sensors that can survive in a high threat environment.

The Air Force’s approach to manning and operating its Predator/Reaper fleet, driven by wartime exigencies, is extremely costly. Operators and support personnel have been taxed to the point that last year the Air Force was forced to reduce the number of CAPs it could maintain. It has had to add thousands of personnel and additional bases to its UAS operation, including expensive rated pilots.  In addition, while highly capable, the Reaper is relatively expensive to deploy and operate, particularly for general ISR missions.

In an era of tight defense budgets, the Air Force will be challenged to continue its high level of support for current conflicts, provide global ISR and address the problem posed by advanced air defenses. Several times over the past few years the Air Force has sought to cut the number of UAS CAPs it is required to maintain in order to save resources and personnel for other priority missions. Its current approach to operating the Reaper fleet has also created a serious shortage of rated pilots.

It is time for the Air Force to rethink not only its acquisition strategy for acquiring new UASs but its concept of operations. For the past decade or more, the Air Force has invested in platform and sensor technologies to make its UASs more capable. It still needs to do so in order to develop the systems for high threat environments. But more importantly, the Air Force needs to invest in technologies that will reduce the costs of operating a large UAS force that must meet a wide range of missions. Great progress has been made in lightweight structures, small, high efficiency engines, autonomous guidance and navigation systems and maintenance-friendly avionics applicable to both manned and unmanned aviation. DARPA and similar research and development organizations have sponsored considerable work exploiting these emerging technologies. UASs designed around such capabilities have demonstrated much longer endurance compared to the Reaper with the potential for reduced manpower and maintenance costs.

The Air Force needs to consider an operating concept centered around four capability “buckets.” Two would be centered on existing platforms/missions: the Reaper for medium altitude, long-endurance combat missions and the Global Hawk for high altitude, long-endurance area surveillance and strategic reconnaissance. A new bucket would be for UASs designed to penetrate high threat environments. The other would be a new medium altitude, long range/endurance UAS designed to take workload off of the Reaper fleet and its personnel while providing the necessary loiter time and payload capacity to cover the general ISR mission.

The greatest ongoing demand will continue to be for medium altitude, long-endurance UASs. This is also where the Air Force is experiencing the greatest costs in both budgets and personnel. By creating a mixed fleet of combat capable Reapers and a new, lower cost UAS for general ISR, the Air Force could meet the consistently high demands for its capabilities at lower costs and, potentially, with improved responsiveness.