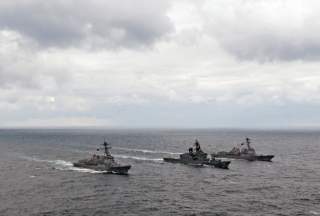 Recently, the US and Japan released the Interim Report on the Revision of the Guidelines for US-Japan Defense Cooperation (PDF). The revision’s the first since 1997 and occurs in the context of Asia-Pacific power shifts. So countries in the region are watching closely just how much the US–Japan alliance is changing, both practically and conceptually. That includes the Australian government, which has long been supportive of a more ‘active’ Japanese security and defence policy at both the regional and global level. It’s a line Japan’s current Prime Minister Shinzo Abe has also been pushing.

Indeed, the five-page interim report points to the prospect of a US–Japan alliance moving beyond a narrow focus on the territorial defense of Japan against major aggression (from China or North Korea, for example). Instead, it’s based on a “strategic vision for a more expansive partnership” and the need to build the alliance as a “platform for international cooperation that would continue to make positive contributions to the region and beyond.” It stresses that among other things future bilateral defense cooperation would focus on:

- the global nature of the U.S.-Japan Alliance; and

- cooperation with other regional partners.”

Moreover, the report’s interesting for what it doesn’t say: in recognition of the expanding scope of geographical cooperation, the report doesn’t mention “situations in areas surrounding Japan,” a phrase that underpinned the 1997 guidelines.

While the 5-page document isn’t specific on details, the report provides some ideas on what these three aforementioned headings might entail. When it comes to “seamlessly” ensuring Japan’s peace and security, it observes that there could be “cases where swift and robust responses are required to secure the peace and security of Japan even when an armed attack against Japan is not involved [italics mine].” In other words, in theory at least, Japan could be asked to provide protection for US forces in hostile environments beyond its immediate neighborhood; for instance in the area of ship-based ballistic-missile defense.

Concerning increased “cooperation for regional and global peace and security,” the document notes that “areas of cooperation to be described may include, but are not limited to”: peacekeeping operations; international Humanitarian Assistance/Disaster Relief; maritime security; capacity building; intelligence, surveillance, and reconnaissance; logistics support; and non-combatant evacuation operations. While the US continues to try to reassure Japan about its security commitments (for instance, the US Navy just announced plans to forward deploy three more ballistic-missile-defense-capable destroyers to Japan over the next three years), Washington also sees the revised guidelines as a chance to move the alliance beyond Tokyo’s preoccupation with the “China threat.”

How likely is the emergence of a more “global” US–Japan alliance? The good news is that Japanese officials involved in drafting the interim report agreed to the report’s language, probably in anticipation of the Abe government’s expectations. Moreover, Japan has been stepping up its Asia-Pacific defense engagement. For example, it agreed to provide both the Philippines and Vietnam with modern Coast Guard vessels. As well, Japan and India are in talks about the possible sale of Japanese amphibious aircraft. Lastly, there’s still the prospect of a submarine deal with Australia.

But serious obstacles stand in the way of a truly global—or even regionally more active—US–Japan alliance. For a start, Japan’s new ‘three conditions for the “use of force” as measures for self-defense’ still impose significant restrictions on the Self-Defense Forces in the exercise of Japan’s right of collective self-defense. If Japan decides to support the US in a regional or global contingency, it’ll probably remain strictly limited to tasks such as logistical support or minesweeping outside the area of actual combat. Moreover, despite much talk about Japan’s “remilitarization,” in reality there’s no such thing. As Brad Glosserman and David Kang have observed in these pages:

“Japan’s defense policies are evolving to keep pace with a changing regional environment, but the idea that Tokyo will be able to threaten its neighbors is just not credible. There is no will, nor the capability to do so.”

As I’ve argued (here and here), Japan’s defense policy remains fundamentally defensive in nature. As Alessio Patalano has shown (paywalled), Japan’s naval modernization reflects a “targeted enhancement” of capabilities required for the protection of its sea lanes, particularly in the area of anti-submarine warfare and basic expeditionary capabilities to safeguard its many islands. Moreover, security reform in Japan remains a cumbersome process (PDF)—and there are already signs that attempts to flesh out at the legislative level what exactly the JSDF could or couldn’t do in support of the US in a conflict mightn’t come to fruition any time soon. Lastly, the Japanese side’s apparently frustrated that the interim report emphasizes the alliance’s global role but makes no mention of China.

We’ll have to see what the final guidelines bring. But in any case, it’s prudent to expect evolutionary, not revolutionary, changes in the US–Japan alliance—and in Japan’s defense policy in particular.

Benjamin Schreer is a senior analyst at ASPI. This piece first appeared in ASPI's The Strategist here.