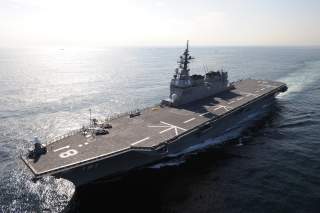 The move would effectively convert the 27,000-ton helicopter-carrying destroyers—which are equipped with a large flat flight deck—into aircraft carriers, which are technically forbidden under the post-war Japanese constitution. The idea would be to deter North Korea and the growing power of a fast rising People’s Republic of China. Indeed, recent local media reports suggest that the Izumo-class was designed from the outset with the idea that they would eventually operate STOVL warplanes such as the F-35B.

The Izumo-class could likely operate the F-35B even without significant modifications—such as the addition of a ski-jump. The F-35B aircraft was designed to operate from the flight decks of U.S. Navy amphibious assault ships. However, the addition of F-35B to the Izumo-class would certainly put those vessels in the category of offensive platforms—after all the F-35 is the Joint Strike Fighter.

The current Japanese government, led by the Liberal Democratic Party’s (LDP) Shinzo Abe, however, has taken a very liberal approach to Article 9 of the Japanese constitution, which says Tokyo will not possess "offensive weapons designed to be used only for the mass destruction of another country." Aircraft carriers are specifically named in the document as a prohibited weapon.

Nonetheless, the Abe government argues the that Izumo-class combined with the F-35B would be considered a defensive weapon—a “defensive aircraft carrier.” But given that the F-35 is primarily a strike aircraft, that line of reasoning is somewhat questionable. “The government and the LDP envision deploying refitted Izumo carriers with F-35Bs to the southwest, where they could respond quickly to problems in such areas as the Senkaku Islands, which are administered by Japan and claimed by China as the Diaoyu,” reads an editorial for the Nikkei Asian Review. “This would enable Japan to repel attacks by enemy fighters or land-based forces.”

But the Abe government intends to stretch wording of the Japanese constitution even further. “The LDP proposals will also include a call to consider letting Japan possess the capacity to launch counterattacks against enemy bases, which is certain to raise more constitutional questions,” the Nikkei editorial reads.

If the Abe government’s plans come to fruition, Japan could purchase at least 20 F-35Bs. However, given that Tokyo has two Izumo-class ships and would need training and pipeline aircraft, Japan would need more jets. Some reports have suggested that Japan might purchase 40 F-35B aircraft. The only potential roadblock is really cost–the F-35 is not an inexpensive aircraft.