Japan May Place Anti-Ship Missiles on Okinawa. And the Reason Is China. 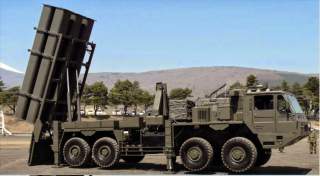 Japan is considering a plan to deploy new anti-ship missiles to the main island in Okinawa, according to news reports.

On February 24th, the Japanese news agency Kyodo reported that “Tokyo has been proceeding with a plan to install a surface-to-ship missile unit on Okinawa Prefecture’s Miyako Island to bolster its defenses against threats to remote islands in the southwest. But it believes the main island should also have a unit as Chinese naval ships have frequently passed between the two islands — an area known as the Miyako Strait — in the East China Sea.”

According to Kyodo, the plan is to place the Japanese Ground Self-Defense Force’s Type-12 surface-to-ship missiles to both islands. These missiles—an upgraded version of the Type 88 missiles—are mobile and mounted on trucks. Although the Kyodo article cites their range as more than 100 km, other sources say they can travel 200 km. Since Miyako and the main island of Okinawa are roughly 290 km apart, deploying missile units to both islands would give Japan the ability to cover much—if not all—of the space between them, which is known as the Miyako Strait. Tokyo is also considering placing anti-ship missiles on Kagoshima’s Amami-Oshima Island, which is north of Okinawa, as well as to Okinawa’s Ishigaki Island. The latter is south of both Miyako and the mainland and sits closer to Taiwan.

The latest moves are in response to China’s growing intrusions in the Miyako Strait. As the Kyodo article pointed out, Chinese naval vessels first transversed the strait when four ships sailed through it in November 2008. Since then, the PLA Navy has become an increasingly frequent presence in the waters. Notably, in December 2016, China’s first aircraft carrier, the Liaoning, passed through the Miyako Strait on a trip that also saw it travel through the Taiwan Strait and the Bashi Channel between the Philippines and Taiwan. On that trip the Liaoning was accompanied by a battle group consisting of “two Type 052C destroyers, one Type 052D destroyer, two Type 054A frigates, one Type 056A anti-submarine warfare corvette, and one Type 903A supply ship.”

China has also regularly sent aircraft through the same area. For instance, in July of last year a PLA Air Force (PLAAF) spokesperson announced: “China’s air force over the past week conducted multiple drills far out at sea, with H-6K bombers and many other types of aircraft flying through the Bashi Channel and Miyako Strait, testing actual battle capabilities over the sea.” This is part of a host of actions that China has sought to make routine and part of the new rules of the road.

While none of these actions violate international law, they have drawn the ire of Japan. At the same time, the Miyako Strait is a key bottleneck for China’s largest ambitions of dominating the so-called first island chain. This also makes it a key node for any Japanese anti-access/area-denial (A2AD) strategy, as well as a critical battleground for Tokyo and Beijing in the future. As Kyle Mizokami noted on these pages: “It’s difficult to accurately predict a conflict between China and Japan, but in many scenarios China will have to force the Miyako Strait.” In that same article, Mizokami noted that the Type 88 missile—the Type 12’s predecessor—would play a prominent role.

“Type-88 land-based anti-ship missiles will keep Chinese forces at bay, preventing landings on the islands of Miyakojima, Ishigakijima, and even Okinawa,” Mizokami wrote. “Not only will these missiles protect populated islands, they will shape the battlefield, creating zones where Chinese ships will have to worry about multiple threats. A mobile system, the Type 88 would be a difficult threat for China to neutralize.”

Although the Type 12 missiles are an upgrade from the older Type 88 missiles, they might only be a stop gap measure. In 2016, Japanese news outlets reported that Tokyo was considering building a more advanced mobile anti-ship missile. As Franz-Stefan Gady noted for The Diplomat at the time, “Japan has not revealed many details about the new weapon system except that it will have an approximate range of 300 kilometers (186 miles), use solid fuel, and is slated to be deployed by 2023.”

Of course, anti-ship missiles are of limited utility without the intelligence, surveillance, and reconnaissance (ISR) capabilities that can provide them with tracking information. But Japan has spent considerable resources bolstering its surveillance capabilities in the East China Sea in recent years. Perhaps most importantly, Japan established a permanent radar station on the island of Yonaguni, which is about 110 kilometers west of Taiwan, in 2016. This complemented an already existing radar system on the main island of Okinawa. Japan is also procuring three RQ-4 Global Hawk Block 30(I) unmanned air vehicles from the United States. These will also help bolster Tokyo’s maritime surveillance. And, Japan’s own ISR capabilities are enhanced by the ones the United States deploys in Japan and elsewhere in the region as well as in space.