Japan Might Buy as Many as 40 F-35B Fighters, Report States 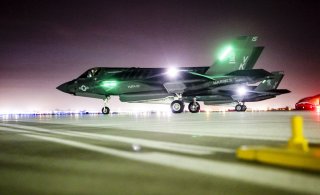 Japan is officially drawing up plans to acquire the F-35B, according to local media reports.

This week, The Yomiuri Shimbun, a Japanese newspaper, said that Shinzo Abe’s administration “is planning to indicate the number of [F-35B] aircraft to be procured in the next Medium Term Defense Program, which is to be compiled at the end of this year.” The story went on to report that the Abe government is “mulling including related expenses in the fiscal 2019 budget plan, with a view to starting the delivery of F-35Bs from around fiscal 2024.”

Sources told The Yomiuri Shimbun that one plan is for Tokyo to acquire between twenty to forty F-35Bs, which would correspond to one or two squadrons. The planes would serve as the successors to the F-15, the Japanese Air Self Defense Forces’ current workhorse aircraft. Currently, Japan operates around 200 F-15s. One 102 of these will remain in service after being upgraded with more modern equipment. The rest will be replaced by the F-35B and the successor to the F-2 jet, under the plan being considered.

The F-35B is the U.S. Marine’s version of the Joint Strike Fighter. Unlike the other variants of the F-35, the F-35B is capable of short takeoff/vertical landing (STOVL). According to Lockheed Martin, the maker of the jet, it is the “the world’s first supersonic STOVL stealth aircraft.” As Lockheed Martin also notes, the F-35B “is designed to operate from austere bases and a range of air-capable ships near front-line combat zones.”

These features are the primary attraction of the jet to Japan. The Yomiuri Shimbun article notes that Tokyo is interested in the F-35B because it can operate from commercial air strips rather than requiring longer military air strips. Japan sees this as especially valuable because some of its most distant islands only maintain commercial airports. Thus, the F-35B could help defend these islands. It would also allow the planes to disperse if Japan’s military bases came under attack from a country like China’s ballistic missiles. “The minimum runway length required for the advanced fighter to take off is relatively short, making it more likely to be able to actually take off even when the airstrip at its home base is under attack,’ the article states.

Still, some modifications would have to be made for the F-35B to operate off of the Izumo-class destroyer. When Reuters first reported in December that Japan was considering this option, it reported that a refitting would be necessary. This would include “adding a curved ramp at the end of the flight deck, improving the deck's heat resistance against jet burners, and reinforcing the ship's air traffic control capability."

The plan to transform the helicopter destroyers into mini aircraft carriers would almost certainly alarm neighbors, most notably China. In response to the earlier reports about refitting the Izumo-class destroyer, Beijing only offered mild condemnation in public, calling on Japan to stick to its pacifist constitution and follow a path of "peaceful development." Behind the scenes, however, China would almost certain object much more strenuously. Still, Beijing’s criticisms about Japan’s plan are undercut by China’s own plans to build a large aircraft carrier fleet.

South Korea is another country that took notice of the reports about Japan’s plan. In fact, shortly after Japan’s thinking became public reports emerged that Seoul was also considering refitting its helicopter destroyers to carry the F-35B.

Should Japan purchase F-35Bs, they will not be the first ones in the country. Japan was the host country for America’s first overseas deployment of the plane. Specifically, the U.S. Marine Corps Fighter Attack Squadron 121 was deployed to Iwakuni air base in Yamaguchi Prefecture in Japan. It reached full strength in November of last year when the last three of the sixteen F-35Bs in the squadron arrived. The first of the planes had been sent to Japan in January 2017. The United States has also deployed the F-35A—the conventional variant of the plane—in Japan. Tokyo itself also has F-35As and ultimately plans to acquire forty-two of them.