Japan Is Running out of Fighter Jets 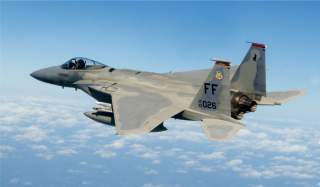 Japan could be facing a fighter jet shortage over the coming decade plus as it phases out some of its older aircraft.

Last week Defense News reported that Japan will face a fighter jet shortage as it starts phasing out its fleetes of F-2s and F-15s starting in the 2020s.

Japan has already begun retiring the F-4 Phantoms from the fleet, following the example of many other countries, including the United States, which retired the last of its F-4s in the late 1990s.

At the same time, Japan has been upgrading its fleets of F-2 and F-15 fighter jets, including improving the air-to-air combat of the former. However, the F-2 is widely ridiculed within the JASDF, and Tokyo currently plans to retire them sometime in the 2020s. The F-15 will also begin being retired in the late 2020s, although additional upgrades could extend its life some years.

"Thus, the JASDF could face a severe force structure crunch in the next decade," Defense News quotes Richard Aboulafia, vice president of analysis at the Teal Group, as saying.

The larger problem is that the the JASDF does not currently have a replacement for the F-15. As one Japan-based military analyst tells Defense News:

“The F-2 is a terrible aircraft, just ask the JASDF. It needs to be mothballed and the money being spent on it moved over to F-15. But there is no replacement for F-15. The F-22 would have been that replacement [and would have meant Japan would not have bought the F-35].”

As this suggests, Japan made a valiant effort to purchase America’s fifth-generation fighter, the F-22. However, Washington ultimately elected to put an export ban on the F-22.

Instead, Japan went ahead and purchased 42 F-35 Joint Strike Fighters in 2011 for its F-X replacement program. The problem, as the Defense News article notes, is that the F-35s aren’t designed to be an air superiority jet.

"It's tough to compare the F-35 with other planes," Aboulafia, who supports the decision to purchase the F-35, notes in the article. “The traditional performance metrics of speed and time-to-climb, maneuverability, range, and payload don't look particularly great. It does offer stealth and much greater sensor capabilities, and sensor fusion. In effect, going with the F-35 means an air service is comfortable with a stealthy, very well connected combat hub, rather than a traditional hot rod bristling with weaponry. But given their sensor and situational awareness attributes, even having a few score of them will provide a meaningful enhancement of the JASDF's capabilities."

The F-35 usefully enhances interoperability between the U.S. and Japanese armed forces, and puts Japan's fighters on the same page as the US and other allies. It also enhances the usefulness of Japan's own Aegis-equipped destroyers by essentially enhancing their range. The networking capabilities also makes the Aegis the F-35's 'wingman' by enabling it to leverage sea-based missiles to expand its strike area.

Indeed, the F-35’s combat cloud, as some analysts have taken to calling it, will be an extremely potent asset. As Robbin Laird once explained:

What is radically new about the F-35 is the fusion of data in the cockpit and the shaping of a new decision making capability within the aircraft and the fleet. The aircraft permits situational decision-making, not just situational awareness. It is a C5ISR (Command, Control, Communications, Computers, Combat Systems, Intelligence, Surveillance, and Reconnaissance) aircraft, which allows the U.S. Marine Corps (USMC) alone to replace three aircraft, including an Electronic Warfare Aircraft with the F-35B.

This is why, as I’ve noted before, many countries that operate Aegis ships—such as Japan and South Korea—are so interested in acquiring the F-35.

Still, this leaves Japan vulnerable in dog fights at a time when adversaries like China and Russia are rapidly enhancing their air superiority capabilities.

One possible replacement, which the Defense News article fails to mention, is the F-3 indigenous fighter jet Japan is trying to construct. The ATD-X program that is aimed at producing the jet has run into myriad problems as it tries to build Japan’s first-ever indigenously built stealth fighter. Nonetheless, a technology demonstrator prototype is expected to conduct its first flight test this summer, as The National Interest has previously reported.

Ultimately, Japan hopes to have the F-3s completed sometime in the 2030s. Should the program continue to stall, however, Tokyo faces the prospect of an immense fighter jet gap.