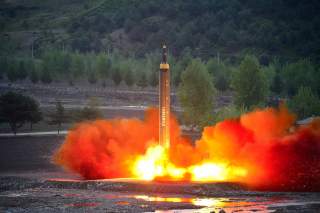 Too often, current tensions in Northeast Asia are seen through one of two dominant lenses: either the growing strategic competition between China and the US—‘destined for war’?—or the sharper and more immediate concerns posed by North Korea. But I want to focus here on a different point: namely, the specific effect that both the North Korean situation and the relentless modernisation of China’s military forces are having in spurring the growth of offensive strike capabilities in Japan and South Korea.

South Korea has recently been working on building its own ballistic-missile capabilities. It test-fired an 800-kilometre-range missile—a Hyunmoo-2B—on 6 April, and again on 23 June, albeit not to the missile’s nominal full range. Officials say the missile will be ‘ready to use after two additional tests’. South Korea apparently intends to deploy its own indigenous capabilities at least partially to offset the growing North Korean ballistic-missile arsenal. But it also seems to want to threaten Pyongyang—and in particular the North Korean leadership—as a deterrent to any North Korean attack on the South.

Meanwhile, some in Japan have begun to show new interest in strike capabilities. Back in March, a policy research group in the Liberal Democratic Party recommended that Japan arm itself with long-range offensive weapons. The group, headed by former defence minister Itsunori Onodera, argued that the country faces a new level of threat from North Korea, making the acquisition of those capabilities a matter of national urgency. Bringing such a proposal to fruition in Japan—a country which has shied away from deploying bomber aircraft—requires the successful clearing of many hurdles. Still, the broader discussion has clearly begun.

What, I hear you ask, do the Americans think of all that? Well, the evidence suggests a growing tolerance in Washington over recent years for its forward-based allies having independent offensive strike options. The Obama administration approved the extensionin reach of South Korea’s ballistic missiles—from 300 to 800 kilometres—back in 2012. And in 2015, Jakub Grygiel (from Johns Hopkins University) used an article in the journal Parameters (PDF) to argue the broader case in favour of tolerance:

The desire of some US allies to rearm presents an opportunity to shore up a system of deterrence challenged by ambitious and disruptive powers. Given the nature of the threat (a limited war scenario) and the security environment of the region (A2/AD capabilities of the revisionists), frontline US allies should be armed with offensive arsenals capable of targeting our common rivals.

Itsunori Onodera visited Washington in May to argue in support of a recalibration of roles in the US–Japan security alliance—namely, a greater sharing of the ‘spear’ role between the partners, instead of the current division of responsibilities with the US as spear-carrier and Japan as shield-bearer. Onodera specifically proposed that Japan have better ‘counterstrike’ capabilities, clearly hoping to deflect concerns about possible pre-emptive attacks on North Korea. James Schoff, a former defence official now at the Carnegie Endowment for International Peace, suggested that both Japan’s worries and potential regional concerns about Japanese rearmament might be met by ‘a measured investment in strike capabilities within the existing alliance framework’.

Japan’s inherent sensitivity to American and regional concerns means it will probably make only slow progress in acquiring ‘prompt-strike’ offensive capabilities—those intended to be used in situations that demand urgent action. Even the US finds itself constrained in that arena, because the Intermediate-Range Nuclear Forces Treaty bans the US and Russia from building, testing and deploying ground-launched ballistic (and slower-flying cruise) missiles with ranges between 500 and 5,500 kilometres. (Indeed, some voices in Washington are now openly calling for the US to supply its forward-based allies with such weapons as a calculated response to alleged Russian violations of the treaty.) Still, if the US is looking for conventional-strike options in Northeast Asia, it already has plenty of those in its own kitbag. Aircraft carriers and B-2 and B-1 bombers seem to have been the instruments of choice recently.

Australia has long enjoyed Washington’s confidence over its deployment of offensive strike capabilities—it was America who sold us the F-111s, after all. But that previously made us something of an anomaly among US allies in Asia. As tensions grow in Northeast Asia, US allies there are increasingly arguing for a shift in roles and responsibilities in their own security arrangements. On the upside, the growth in offensive strike capabilities among US allies better reflects a more multipolar Asia. And, overall, it ought to strengthen deterrence of regional adversaries. On the downside, though, it’s another sign that the ‘tethering’ role which US alliances have long played in Asia is starting to weaken.