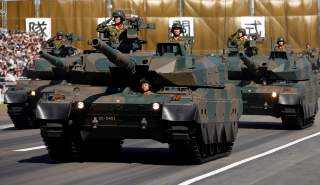 Japan on Saturday commissioned a brand-new unit of its Self-Defense Forces (SDF), its first such specialized marine detachment for amphibious warfare since World War II, to be deployed on islands extending over 1,000 kilometers from Kyushu toward Taiwan that Tokyo believes are vulnerable to attacks by China.

A ceremony was attended by some 1,500 members of the SDF’s new Amphibious Rapid Deployment Brigade (ARDB) wearing camouflage suits at a strategically located military base, Camp Ainoura, near Sasebo on the island of Kyushu, just across the East China Sea from China’s Jiangsu province.

Vice-Minister of Defense Tomohiro Yamamoto said these marines would be trained to “counter invaders on the nation’s frontiers.”

“Given the increasingly difficult defense and security situation surrounding Japan, the defense of our islands has become a critical mandate,” he said.

But he dodged questions on whether the newly minted elite brigade would be stationed on archipelagos subject to conflicting territorial claims by Tokyo and Beijing, such as the Senkaku Islands, called the Diaoyus by China.

Japan Times reported that the unit was “designed to play a key role in retaking remote islands that fall into enemy hands.”

The brigade is the latest addition to a growing marine force that includes quasi-aircraft carriers such as the the Hyuga and its sister Iseof the Hyuga-class “helicopter destroyers,” Osprey tilt-rotor troop carriers and various other amphibious assault ships and vehicles.

Last month the United States deployed its F-35Bs for their first at-sea operations aboard the USS Wasp amphibious assault ship, which is based at Sasebo. The Kyushu port is also home to the Ise helicopter carrier and is close to the marines’ base.

Observers say the activation of the 2,100-strong ARDB takes Japan a step closer to creating a force similar to a US Marine Expeditionary Unit (MEU) capable of planning and executing operations at sea far from its home base.

Grant Newsham, a research fellow at the Japan Forum for Strategic Studies, told Reuters that the formation of such a marine corps already demonstrated Tokyo’s ability to put together an ad hoc MEU, but “to have a solid, standing MEU capability requires concerted effort” and Tokyo could have a reasonable capability “within a year or year and a half.”

On Monday, Beijing mouthpiece People’s Daily warned that Asia needed to “be wary of the revival of militarism in Japan,” citing that country’s postwar constitution that confined the size and capacity of its armed forces to defense only.

“Militarism is again rearing its ugly head in Japan,” the paper said in an op-ed.

In 2016, Japanese Prime Minister Shinzo Abe rammed through security bills meant to provide a legal basis to unfetter the SDF for deployment in wartime wherever its allies are under attack, despite vocal resistance from the opposition and mass protests.

Until around 10 years ago, the development of amphibious tactics for landing troops on enemy-held shores was seen as a taboo under the pacifist constitution, which limited the capabilities of the SDF to the “minimum necessary level.”

“From the perspective of right-wing forces, deploying Japan’s troops beyond its borders is the prerequisite for Japan to become a normal state, rub off its World War II tarnish and redeem its old-time glory,” the People’s Daily commentary said.

Four of the six brigades of the PLA marine corps are under the command and control of the East Sea Fleet and North Sea Fleet, both tasked with parachuting or landing on beachheads to take over disputed islets as well as countering Japan’s military presence in the East China Sea.