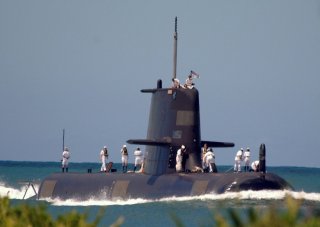 So Prime Minister Malcolm Turnbll has announced that the next generation of Australian submarines will be built by French firm DCNS.

The big political story is that this announcement will help secure the Government a number of South Australian seats in the upcoming election. The big strategic story is not so much who won this bid but who lost it: Japan. The Interpreter has debated exhaustively the strategic implications of this decision: would a sub deal with Mitsubishi Heavy Industry bring us closer to Japan? Would we form a quasi-alliance that might entangle us in Japan’s increasingly fractious relationship with China? What does that mean for our China-exposed trading industry?

Over coming days we may well see stories emerge of Chinese relief at this decision, and maybe even implications that Australia has buckled to Chinese pressure not to choose the Japanese bid. But one thing to keep in mind as you read these stories is that Australia is still doubling the size of its submarine fleet from 6 to 12. Whether the contractor is French, German, Japanese or other, that is still a substantial statement of Australia’s strategic anxieties, which inevitably center around China’s long-term intentions.

Granted, it will be decades before we actually field a 12-submarine fleet, and as I have argued previously, it may not make much difference to the larger strategic balance, which is shifting away from Australia. But nevertheless, it is a dramatic gesture which we might find alarming had it been made by any of our close neighbors.

Perhaps the reason our neighbors have not expressed concern is that they understand perfectly well what this build-up is about. They too are alarmed at the growth of Chinese power and its increasing assertiveness in the region. And they too recognize that submarines are highly effective tools to counter that growing military strength.

In the end, none of this may matter to China, since its growth trajectory, and its tenacity and resolve, may see it gradually assert its authority over the South China Sea and beyond, whether countries like Australia re-arm or not. As Hugh White has written, the question is ultimately about the balance of wills, rather than the balance of arms. But if the military capabilities of US allies such as Australia do weigh on Chinese decision-makers, then today’s announcement should be cause for reflection in Beijing, not celebration.