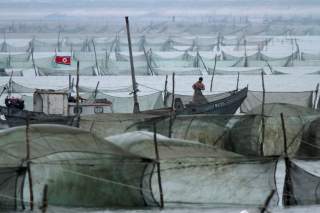 The announcement by the Japanese Coast Guard that it has recently warned over 800 North Korean fishing vessels to leave Japanese waters would appear to demonstrate that Tokyo is finally addressing the deficiencies in its maritime domain awareness – and aims to address  the latest round of so-called North Korean “ghost ships” that first started to appear, with corpses on board, three years ago. The bodies are still coming ashore, however. And whether Japan likes it or not, it is powerless to prevent the penetration of North Korean vessels deep into its waters.

For now, there appears to be no real threat to Japanese security posed by the vessels or the men on board, despite evidence in some instances of murky connections to the North Korean military. There is nothing to suggest, for example, that the ships are serving any covert purpose – whether surveillance of Japanese ports and harbors or other missions of a military nature.

Still, this second wave of North Korean “ghost ships” seems different and is unacceptable for reasons that may not have applied when the first wave appeared.

The fact that so many vessels have managed to come ashore is noteworthy in and of itself, especially in light of Japan’s prior experience with North Korean abductions of Japanese citizens using vessels that went undetected both by the Japanese coast guard and the Japan Maritime Self-Defense Force.

So far, Tokyo has avoided the touchy subject of why all these North Korean vessels are appearing. The explanation appears to be that the North Korean military has displaced North Korea’s own fishermen by selling off fishing rights to Chinese fishing companies – granting them licenses to operate exclusively in waters ostensibly controlled by North Korea. In which light, questions must surely be raised as to why Japan has not intercepted the North Korean vessels in its own waters more aggressively, or protested China’s role in the shift, rather than simply issuing warnings.

The recent arrest of three crew members of a North Korean fishing boat on suspicion of stealing equipment from a remote fishing hut in Hokkaido further demonstrates how Japanese officials have attempted to treat this delicate situation with restraint. Even an unsuccessful attempt by the North Korean fishermen in question to escape from a Japanese coast guard vessel near Hakodate port was downplayed by the Japanese media.

The degree of caution is troubling, especially as there is no end in sight. On November 26, a boat with eight bodies aboard was found on the shore of Akita Prefecture, and two more bodies were found on another vessel in the same vicinity a few days later. Another body had been found earlier in a wreck along the coast of Sado Island, in Niigata Prefecture.

Japan’s NHK has reported that North Korea “is calling on fishermen to work hard to catch more fish this winter, in an apparent effort to make up for an acute food shortage and to earn foreign currency.”

China, which could well be viewed as having decidedly ulterior motives in this whole drama, has gone unmentioned.

Japan has allowed this situation to intensify through a combination of gross inattention and inaction in terms of maritime domain awareness, along with a lack of clarity about the true nature and scope of the North Koreans’ actions as the Chinese have prodded them towards venturing into disputed fishing grounds.

To simply excuse this wave of illegal fishing as the result of food shortages and a drive by North Korea to earn foreign currency also overlooks the possibility that the Chinese connection may constitute a willful violation by the Chinese of UN sanctions on North Korean.

Japan needs to address this situation quickly for a variety of reasons, including its own security. It needs to think hard about making more aggressive intercepts offshore, putting more maritime and aviation assets in play so as to achieve much greater maritime domain awareness, and bringing more attention to the part played by China.