Japan's Embrace of Collective Self-Defense: A Worrisome Turn from the Past? 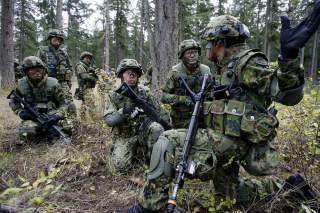 As already noted by The National Interest, Japanese Prime Minister Shinzo Abe recently began official discussions into whether Japan should be able to engage in collective self-defense—that is, whether Japan’s military forces should be allowed to come to the aid of allies even in circumstances when Japan itself is not under attack.

Even if Abe’s announcement leads to naught, the very fact that such a dialogue can take place in Tokyo is indicative of how far restrictions on Japan’s military activities have loosened since the country renounced its sovereign right to wage war per its 1947 constitution.  In grand strategic terms, Abe’s move stands in particular contrast to two core tenets of Japan’s erstwhile foreign policy stance: the Yoshida Doctrine and the Fukuda Doctrine.

For most countries, the constitutional prohibition of war-making powers would be viewed as a major handicap.  Yet in post-war Japan, a cadre of shrewd political entrepreneurs found a way to turn Japan’s demilitarization into a veritable boon.  Under the guidance of Prime Minister Shigeru Yoshida in particular, Japan during the early Cold War embarked upon a grand strategy of outsourcing security to the United States so that scarce national resources and political attention could be devoted to the task of rebuilding and expanding Japan’s domestic economy.  Sheltered beneath the U.S. security umbrella, Japan underwent remarkable economic growth in the 1950s and 1960s.

To be sure, the Yoshida Doctrine never amounted to a complete neglect of military policy.  The Japan Self-Defense Forces (JSDF) did expand in size and remit over the course of the Cold War so that Japan could assume a greater burden of its own defense, especially at moments when the commitment of the U.S. appeared to be in doubt.  As the political scientist Jennifer Lind once put it, Japanese military policy has been more a case of “passing the buck” than “pacifism.”

Nevertheless, a second Cold War-era foreign policy doctrine sought to reassure outsiders that Tokyo would never pose a military threat to its neighbors.  On an overseas visit to ASEAN member states in 1977, Japanese premier Takeo Fukuda declared that Japan would not strain to become a military power and would instead invest its considerable material wealth and diplomatic energy towards building cooperative relationships with others in the region.

The Fukuda Doctrine can be considered a forerunner to China’s contemporary doctrine of “peaceful rise” (or “peaceful development”).  Like China today, Japan in the 1970s—a rising state with considerable actual and latent military potential—sought to convince others of its permanently peaceful intentions.  Nor was Fukuda’s promise disingenuous.  With Japan’s political leadership firmly focused on domestic goals, Japan really did wish to avoid entering into costly and self-defeating military competition with others.

Today, however, the international environment has changed.  Across the East China Sea, Beijing has surpassed Japan in economic terms and boasts a formidable military of its own.  The region’s numerous maritime disputes frequently erupt into mini-crises, each seemingly capable of sparking broader diplomatic—and perhaps military—conflict.  Governments across Asia-Pacific nervously look to the United States for protection even as large sections of the U.S. call for retrenchment.  In this context, not only the Yoshida Doctrine but also the Fukuda Doctrine looks hopelessly anachronistic.

Abe’s current foreign policy overtures can therefore be considered part and parcel of a gradual evolution away from the Yoshida and Fukuda doctrines.  While the U.S. remains an essential ally, it is by offering the U.S. a more reciprocal relationship that Abe seeks to maintain and strengthen that alliance.  In the past, Japan has been badly criticized (including by Washington) for putting its own narrow self-interest ahead of those of its allies, most notably during the first Gulf War.  Traumatic enough in 1991, a similar characterization of Japan today—as cold, self-serving and ungrateful—could prove ruinous.