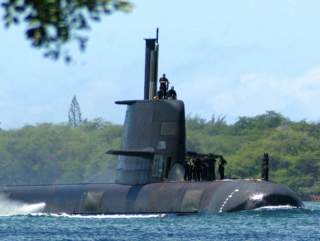 Reports emerged last week that Japan’s bid to build Australia’s new submarines had been all but eliminated, or was languishing in third place behind the French and German bids, as the Australian government prepared to announce the winner. Subsequently, Prime Minister Malcolm Turnbull announced on Tuesday the successful bidder for the $50 billion contract was the French firm DCNS. Sources cited by the ABC reported technical and engineering problems with Japan’s bid. The widely understood sticking point for the European bids, namely U.S. reluctance to share the details of its AN/BYG-1 Combat Management System with European firms has evaporated. President Obama is reported to have indicated as much to Prime Minister Turnbull, with a “senior source” suggesting that there would be no implications for the alliance, no matter which bidder won. Australia is the only country in the world the United States shares this system with. A frantic eleventh-hour effort to rescue the bid by the Japanese—who appeared to be unaware of the perilous state of their bid until very recently—failed. Losing this massive opportunity was a significant blow for Japan, which was also recently outbid by China to build Indonesia’s fast rail. All this while two JMSDF ships and a submarine were in Australian waters for an eleven-day exercise with the RAN.

Most commentators agree former Prime Minister Tony Abbott jumped way too early and publicly with his overt support of the Japan bid in his eagerness to strengthen ties with Japan. The Competitive Evaluation Process that was subsequently announced was widely perceived as an attempt to regain the veneer of due process, if little more. Notwithstanding this popular perception, the European bidders stayed the course. German firm ThyssenKrupp AG said in March it favoured domestic Australian construction as the best option, a tantalising prospect for the Turnbull government now with an election looming. France’s DCNS, moreover, promised smooth intellectual property flows and extensive local industry engagement. This, in the context of Turnbull’s innovation agenda, may have been the clincher. Political concerns over the Japanese bid had always centred on Japan’s lack of experience in the defence export game, and uncertainty regarding its domestic political landscape. In these contexts of political overtures, election cycles, domestic imperatives, and commercial risks, we might be obliged to take all this at face value. An unpredictable high-stakes game, prone to misperception, bound to defy expectation right up to the last moment.

In the broader regional strategic context, on the other hand, not so obliged. The $50 billion acquisition of Australia’s twelve new submarines is no ordinary business deal. It’s a strategic move of regional import. A successful Japanese bid would have been widely perceived as representing the backbone of a burgeoning quasi-alliance between the two countries. The actual extent of this has been hotly debated recently. Suffice to say the perceptual impact, at least, of a Japan-Australia deal on such a strategic acquisition would have been felt regionally, and the epicentre of that impact would be in Beijing. China’s Minister of Foreign Affairs used the strong imagery of WWII to caution Canberra against a Japanese sub deal in February. The United States, for its part, has been widely understood to favour a deeper Australia-Japan relationship, as a cross-brace to its two most significant regional alliances. The submarine deal would further enable regional U.S. influence in both the military-technical and political domains. In addition, the United States clearly wants both Australia and Japan individually to take on a greater share of the security burden in the Asia-Pacific.

So what, then, can we make of this apparent about-face in the strategic context? If, as reported (and quite oddly) Obama felt it necessary to remind Australia of its sovereign autonomy regarding its decision on the submarine acquisition, one interpretation of this might be as an indirect invitation to scuttle the Japan bid. Otherwise why say it? In turn, this would obviously represent a significant concession to Beijing. If so, why now? What else might help explain such a move by the Obama administration? U.S.-China relations in the South China Sea are bad, and could worsen, so it makes little sense as a U.S. concession. Courting Chinese support for the Paris climate change accord also seems an incomplete explanation.

At the Nuclear Security Summit in Washington in late March, which ostensibly focused on the stiffening of standards regarding the physical protection of nuclear materials, Obama held extended one-on-one sideline meetings with President Xi, President Park, and Prime Minister Abe. North Korea’s recent missile and nuclear weapons testing reportedly dominated the agenda. The North’s actions of late, including calls by the leadership to put nuclear weapons on hair-trigger alert, and subsequent reassurances (unconfirmed) that it indeed had the capability to do so, have caused observers to consider whether or not the game had finally begun to change for the Kim regime. These extraordinary measures go beyond a level of provocation necessary for Pyongyang to extract what it has wanted in the past. In addition, South Korea is now seriously considering the American offer to provide a THAAD missile defence system to Seoul, a move strongly opposed by Beijing. China, for its part, has reportedly been more strictly implementing the recent UN regime of sanctions against its historical ally, perhaps signalling a shifting of attitudes, if not an exhaustion of patience, with Kim Jong-Un by Beijing.

On March 30 of this year, President Obama wrote an Op Ed in the Washington Post that includes the following statement: “The United States will continue working with allies and partners for the complete and verifiable denuclearization of the Korean Peninsula in a peaceful manner.” The relative successes of Obama’s diplomatic outreach to longtime foes in Iran and Cuba have aroused speculation that the president might be eyeing a final diplomatic coup with North Korea. Any such approach would depend greatly on China’s acquiescence if not active support. The question being raised here is to what extent is Washington prepared to go to guarantee that support? What concessions would Obama need to make to Xi to extract such a grand deal? Part of the image forming of an Obama doctrine has been the President’s willingness—to the chagrin of U.S. partners—to seek grand bargains with powerful states, often in lieu of said partner’s knowledge or input. Such have been Israeli and Saudi complaints about the Iran deal, at least. Is there a connection between the demise of Japan’s submarine bid and Obama’s greater diplomatic aspirations in northeast Asia? The late-hour scuttling of Japan’s bid seems to have surprised the Japanese as much as it has most observers. Obama’s outreach to Iran and Cuba has reflected a fundamental willingness by the President to sideline past behaviour in the quest for progress. One of the biggest obstacles to U.S.’s engagement of Pyongyang has been its traditional aversion to be seen rewarding bad behaviour with diplomatic overtures. It’s clear that President Obama sees this stance as ineffective and redundant. If an overture to Pyongyang is in the offing, with China, South Korea, and Japan onside, was the scuttling of the Japanese submarine bid part of the price, unbeknownst to Japan until very recently of course? All it would have taken, as the French bid which promises a full Australian-based build is both politically and economically attractive to the Australian government, was the hint that “Option J” was no longer necessarily an American preference.

But the timing is extraordinary. The ruling by the Arbitral Tribunal at the Permanent Count of Arbitration (PCA) in The Hague on claims brought by the Philippines against China is due in four to six weeks. Analysts are concerned China may be preparing to take preemptive action in advance of the ruling, by beginning dredging and construction activities on Scarborough Shoal and possibly declaring an ADIZ over the Spratly islands. If this occurs, regional tensions could reach new heights. Coming in the wake of news about the failure of Japan’s much touted submarine bid and the perception of weakening regional solidarity that has already accompanied it, the price tag for an Obama-led diplomatic coup in North Korea will have multiplied. But would a denuclearized Korean Peninsula be worth the price of the Australia-Japan submarine deal, in perceptions at least? Washington would take that deal any day of the week. The fact is, regional solidarity does not, and never did, rest on the submarine deal. It would reveal, however, just how fungible the White House’s red lines in the South China Sea are, however much the Pentagon disagrees. If it’s true that the State Department gagged Admiral Harry Harris recently over his SCS comments, that would be why. But these trends suggest the time for Washington to fully declare the extent of its commitment to the countries that circumscribe the South China Sea is getting uncomfortably close. If Hugh White is correct, we should prepare for a great deal more discomfort.

Zac Rogers is a Ph.D student at Flindlers University of South Australia.