Japan's Master Plan to Destroy the Chinese Navy in Battle 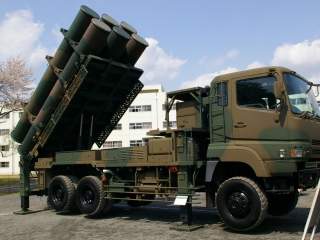 It seems that Japan is developing plans to craft its own Anti-Access/Area-Denial (A2/AD) strategy—or what one former Japanese official describes as “maritime supremacy and air superiority”—against the Chinese Navy.

The plan itself, detailed by Reuters, makes a tremendous amount of good sense:

“Tokyo is responding by stringing a line of anti-ship, anti-aircraft missile batteries along 200 islands in the East China Sea stretching 1,400 km (870 miles) from the country's mainland toward Taiwan. . .

“While the installations are not secret, it is the first time such officials have spelled out that the deployment will help keep China at bay in the Western Pacific and amounts to a Japanese version of the "anti-access/area denial" doctrine, known as "A2/AD" in military jargon, that China is using to try to push the United States and its allies out of the region.

“Chinese ships sailing from their eastern seaboard must pass through this seamless barrier of Japanese missile batteries to reach the Western Pacific, access to which is vital to Beijing both as a supply line to the rest of the world's oceans and for the projection of its naval power.”

The piece also spells out an overall larger Japanese military presence in the East China Sea, which will certainly not please China:

“Over the next five years, Japan will increase its Self-Defense Forces on islands in the East China Sea by about a fifth to almost 10,000 personnel.

"Those troops, manning missile batteries and radar stations, will be backed up by marine units on the mainland, stealthy submarines, F-35 warplanes, amphibious fighting vehicles, aircraft carriers as big as World War Two flat-tops and ultimately the U.S. Seventh Fleet headquartered at Yokosuka, south of Tokyo.”

Does this plan sound familiar? It should if you have been following the topic. Such ideas have been floated in the U.S. national security community for a few years now. Toshi Yoshihara, a past National Interest contributor and professor at the U.S. Naval War College, who is also quoted in the Reuters piece, presented a similar idea as part of a much larger Japanese A2/AD strategy in a Center for New American Security (CNAS) report back in 2014:

“the Ryukyu Islands themselves could support Japanese anti-access forces. For example, truck-mounted anti-ship and anti-air missile units dispersed across the archipelago would erect a formidable barrier. In wartime, effective blocking operations would tempt PLA commanders to nullify these gatekeepers. Such exertions, however, would tie down significant portions of China’s warfighting capacity while depleting manpower and materiel. Because the islands hold little innate value to Beijing the Chinese leadership might decide that escalation was not worth the effort.”

He also explains that China could not easily destroy the missiles:

“Any attempt to eliminate the Japanese ASCM threat would require the PLA to open a geographic front about 600 miles wide. A Chinese suppression campaign involving air power and ballistic- and cruise-missile strikes would accelerate the rate at which the PLA consumed finite stocks of munitions, airframes and airmen. The result would likely prove disappointing, similar to coalition forces’ fruitless 'Scud hunt' during the 1990-91 war against Iraq. Amphibious assault, the surest way to dislodge the island defenders, would also represent the riskiest way, with Japanese and U.S. forces playing havoc with landing forces."

Yoshihara continues, spelling out the clear benefits to Japan:

“Abundant, survivable, inexpensive weaponry such as the Type 88, the Type 12 and other mobile air-defense units could coax China into exhausting more costly and scarce offensive weapons for meager territorial gain and uncertain prospects of a breakthrough into Pacific waters. Relatively modest investments in such forces could spread Chinese forces thin—furnishing Japan much needed breathing space.

"Beyond the tactical benefits, strategic dividends would accrue to Japan. Possessing the option to surge anti-ship and anti-air missile units onto the Ryukyus at short notice would demonstrate Japanese resolve while substantially bolstering Tokyo’s capacity to act effectively in times of crisis. Japan’s blocking forces would presumably limit their lethal ranges to PLA units operating in the commons and over Japanese territory. Such geospatial restraint would reduce the likelihood of escalation and dovetails with Tokyo’s defensively oriented posture, bolstering its diplomatic narrative on the world stage.”

Japan’s plan to bolster its defenses and limit the freedom of action of the Chinese Navy and possibly air assets is a smart play. However, Tokyo must also work to counter what might be an even more pressing challenge: Beijing’s increasingly large and advanced missile platforms that could target Japanese and allied bases. Yoshihara, as part of his CNAS paper, spells out a number of smart ways to do this. As I love to say, read the whole report—it seems likely the Japanese government did.