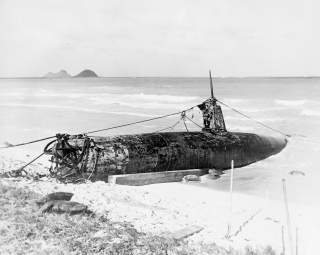 A patrolling PBY bomber dropped depth charges on the crippled submarine. Sakamaki decided to abandon ship and attempted to detonate the scuttling charge — but even the ship’s self-destruct device failed to work.

The following morning, Hawaiian soldier David Akui captured a the Japanese sailor. The first Japanese prisoner of war of World War II, Sakamaki refused to cooperate during his interrogation, requesting that he be executed or allowed to commit suicide.

The Japanese military became aware of his capture, but officially claimed that all of the submarine crews had been lost in action. A memorial to the Special Attack Unit omitted his name.

The crew of Ha-18 abandoned ship without firing either of their torpedoes after falling victim to a depth charge attack. Nineteen years later, the U.S. Navy recovered the sub from the floor of Hawaii’s Keehi Lagoon and ultimately shipped it off for display at the Japanese Naval Academy at Etajima.