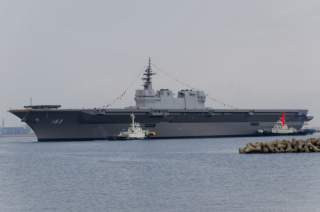 Japan’s largest warship since World War II has just entered service. Japan’s Maritime Self Defense Force (JMSDF) took delivery on Wednesday of the Izumo, a helicopter carrier “as big as the Imperial Navy aircraft carriers that battled the United States in the Pacific.”

The Izumo was indigenously constructed at a shipyard in Yokohama, near Tokyo, at a cost of around $1.5 billion. It is named after the former Izumo province in western Honshu. In Japanese mythology, the entrance to yomi (hell) is located in Izumo.

Perhaps this is apt, as the ship’s capacities definitely have the ability to dispatch Japan’s foes. The Izumo displaces 19,500 tons and is 248 meters (814 feet) long. According to Japanese Defense Minister Gen Nakatani, the ship will improve the Japanese Self-Defense Forces’ capacity to deal with submarines: “As well as having the capacity to search for submarines itself, it will be able to deal with submarines over a larger area as it’s equipped with a lot of helicopters.”

The ship can carry nine helicopters, in addition to 470 personnel. However, in theory, the ship can carry over twenty aircraft. According to reports, while the Izumo “does not have a catapult necessary to launch fixed-wing fighters, a planned vertical-take-off-and-landing (VTOL) variant of the F-35 could fly from the Izumo's flight deck.” This basically makes the Izumo—which gives Japan its largest naval flat surface since the Second World War—an “aircraft carrier in disguise.”

Designating it a helicopter destroyer allows Japan to circumvent its constitutional ban on waging offensive war, as aircraft carriers are considered offensive weapons due to their ability to project force. Japan is also adding “longer-range patrol aircraft and military cargo planes to its defense capability, and buying Lockheed Martin F-35 fighter jets, amphibious assault vehicles and Boeing's Osprey troop carrier, which can operate from the Izumo.”

Natakani noted that the Izumo could project Japanese personnel and equipment in a variety of functions beyond Japan, including “peace keeping operations, international disaster relief, and aid.”  This is all part of a concerted Japanese effort under Prime Minister Shinzo Abe of stepping up Japanese defense spending in the face of an assertive China. Tensions between the two countries are especially great due to a territorial dispute in the East China Sea. In May 2013, Japan said it detected submarines navigating under water close to territorial waters near Okinawa and Kagoshima prefectures.

Nakatani noted that “China has aircraft carriers,” before adding that Japan wasn’t thinking of operating the Izumo as an aircraft carrier. A second ship of the same size and specifications as the Izumo will likely be introduced in early 2018.