JASSM-ER: The 'Stealth' Missile Fired from a B-1 Bomber That Struck Syria 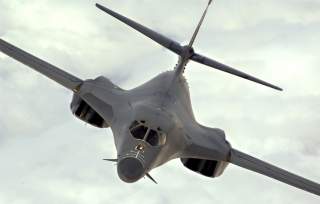 “The B-1s employed the JASSM, our joint-standoff missile,” Joint Staff Director Lt. Gen. Kenneth F. McKenzie Jr. told reporters at the Pentagon on the morning of April 14. “So that was the weapon that they used. B-1s were accompanied by U.S. fighters up to the launch-and-release point, as a normal way you'd integrate an air package, to provide protection to the bombers.”

Indeed, the addition of the JASSM-ER made the aerial portion of the raid on the Syrian research lab possible. While the B-1B was a capable bomber initially when its was fielded in the 1980s, the aircraft is not survivable against modern air defenses and has to rely on standoff weapons when faced with a conventional foe. In this case, while Russian forces in Syria did not attempt engage allied forces, the very presence of advanced Russian surface-to-air missile defenses such as the S-300V4 and the S-400—which have a range of 250 nautical miles if equipped with the appropriate missiles—necessitated the use of the JASSM-ER’s standoff capability.

Thus, the addition of the JASSM-ER allowed a non-stealthy aircraft that would normally be unable to strike inside a so-called anti-access/area denial (A2/AD) bubble to hit targets well inside such a zone. As such, a weapon such as the JASSM-ER breathes new life into conventional non-stealthy aircraft such as the B-1B or fourth-generation fighters such as the F-16 Fighting Falcon or F-15E Strike Eagle, which are unable to penetrate into heavily defended airspace.

Given the JASSM-ER’s stealth and extremely long range of more than 600 nautical miles, the weapon could also be a solution for the U.S. Navy in the Pacific theatre to the increasing challenges posed by Chinese anti-ship cruise and ballistic missiles such as the DF-21D and the DF-26 which threaten to force the carrier out as 1000 nautical miles offshore. With a combination of the JASSM-ER—which with forthcoming improvements will have even better range—plus the range of the Super Hornet, the Navy’s F/A-18E/F could strike at targets ashore even when face against a Chinese A2/AD bubble.

The Navy dropped out of the JASSM program in 2005 in favor of the SLAM-ER when the Lockheed Martin-developed weapon ran into developmental trouble. However, given that the Navy is already purchasing the AGM-158C Long Range Anti-Ship Missile (LRASM) version of the weapon and given the threats in the Pacific theater, the sea service should reconsider. The addition of the JASSM-ER to the Navy’s arsenal would allow the service to fight more effectively against the A2/AD threat in that region without having to purchase additional stealth aircraft.

Indeed, given that the F-35C would be able to penetrate into hostile airspace—especially with the aid of the forthcoming MQ-25 tanker—and provide real time updates to a weapon such as the JASSM-ER via the Naval Integrated Fire Control – Counter Air (NIFC-CA), the combination of the AGM-158B, Super Hornet and Joint Strike Fighter could be a potent capability. As now retired Rear Adm. Mike Manazir once explained, a weapon launched from a Super Hornet might receive terminal guidance from an aircraft such as an F-35 operating near the target location via the network. Thus, the JASSM-ER could one part of the solution to defeating the A2/AD challenge in the Western Pacific. It’s not an either or proposition.