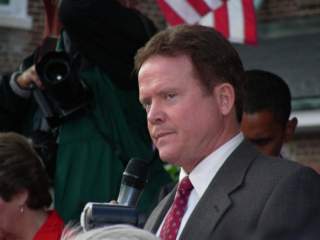 “Our country is in need of a clearly articulated foreign policy statement,” Webb boldly declared to an audience at George Mason University.

Senator Webb, who also served as Secretary of the Navy and Assistant Secretary of Defense during the Reagan administration, characterized current U.S. foreign policy as reactive and unstructured. Given this state of affairs, Webb intimated his own platform aimed at grounding America’s approach to the world in seven key principles.

1. The United States should be able to identify its national security objectives and value systems.

“I like to see myself as a realist,” Webb told audience members, contrasting himself with those “who see war at every corner.” Senator Webb affirmed his opposition to foreign interventions that did not serve any discernable national interest or worse, undermined America’s global position.

“I was one of the first people to warn of the strategic blunder of going into Iraq,” Webb recalled. Indeed, he penned an op-ed in The Washington Post in September 2002 in which he asked readers, “Is there an absolutely vital national interest that should lead us from containment to unilateral war and long-term occupation of Iraq?”

Throughout the years, Senator Webb has maintained a consistent position on foreign interventions. The Obama administration justified the 2011 War in Libya in humanitarian terms via the responsibility to protect, a pretext Webb criticized as “vague.”

2. The United States should be able to develop partnerships with trustworthy actors.

Senator Webb posited three criteria when considering aligning with a foreign nation: the country’s stability, whether it engages in aggressive expansionism, and how its government treats the citizenry.

Despite listing human rights as an area of interest in fostering overseas partnerships, Webb challenged inconsistent approaches to democracy overseas, citing American engagement with China as a standard. When he returned from a trip to Myanmar, a reporter questioned how he could visit an authoritarian state in good conscience. Webb pushed back: “When was the last time China had an election?”

The senator also recalled a hearing just prior to the Libya intervention. Then-Secretary of Defense Leon Panetta charged, “Any government that kills its own people in nonviolent protests does not deserve to be in power.” Webb challenged Panetta: “What is your comment on the Tiananmen Square incident?”

Here, Senator Webb stressed that Japan and the Philippines, two nations tied to American defense pacts, should be a “preeminent concern.”

Senator Webb articulated his view that China’s behavior in East and Southeast Asia warrants a robust American presence in the region. He noted the area’s uniquely precarious position, describing it as “the only place where the interests of China, Russia, and Japan intersect.” Here, Webb believes the United States can be a stabilizing influence while supporting a friendly Tokyo.

Senator Webb is particularly alarmed over China’s aspirations in the South China Sea, which Beijing claims in nearly its entirety. “It is vitally in our national interest to communicate strongly with China when it takes expansionist moves in the South China Sea.” The dispute in the area could draw the Philippines, a treaty-ally, and other states like Taiwan and Vietnam into conflict with China.

4. The United States should support its non-treaty allies.

Not all American allies are bound to Washington by formal agreements. Senator Webb affirmed that these non-treaty partners should receive attention too, particularly in the Middle East, a region that hosts many U.S. aligned governments few of whom have formal defense arrangements with the United States.

5. The United States should maintain its superiority in strategic systems.

The United States maintains a qualitative technological edge over a range of potential adversaries. This is visible in weapons systems, nuclear capacity, and space capabilities. Senator Webb affirmed that these technological advantages should not be traded away, even for economic reasons.

6. The United States should preserve and recognize the right of national self-defense.

Senator Webb closely linked this point to issues of terrorism. The United States should be able to strike back against such attacks. This view, Senator Webb explained, is consistent with the United Nations Charter, particularly Article 51, which reads: “Nothing in the present Charter shall impair the inherent right of individual or collective self-defense if an armed attack occurs against a member of the United Nations.”

7. Congress must step up and restore its relationship with the executive branch.

Senator Webb identified a shift in war-making power from the Congress to the presidency. He drew on Libya and Iraq as examples of executive military maneuvers that bypassed legislative approval. In both cases, Webb felt that no vital national interest was at stake.

Whether one agrees or disagrees with the substance of Senator Webb’s foreign policy platform, his positions are undeniably clear and well defined. As Webb explores a 2016 presidential bid, the seven points he articulated on Thursday could form the basis of a wider debate among the candidates on the future of America’s international role.

Evan Gottesman is an intern at The National Interest.