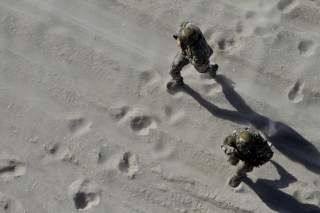 There are reasons to be worried about a Trump presidency, but a major addition to the list would be if the President-elect were to adopt University of Chicago professor John Mearsheimer’s “realist” foreign policy, which he recently espoused in The National Interest. In reality, this brand of realism is profoundly unrealistic, both in its reading of recent history and in its policy prescriptions.

Start with Mearsheimer’s assertion that for the past twenty-five years, American leaders have pursued a policy of “liberal hegemony which calls for the United States to dominate the entire globe.” There is more than a touch of hyperbole concerning the Clinton and George W. Bush eras, but to include in this claim the nearly eight years of Obama’s presidency looks more like a stunning departure from the real world.  Instead, that record has more often been one of retrenchment, inaction, or withdrawal. In Syria, for example, the president rejected the advice of his top foreign policy cabinet members (representatives of what Obama’s Deputy, Ben Rhodes, and Mearsheimer call “the blob”) and not only failed to provide meaningful support to moderate rebels when this might have made the difference, but failed to enforce his own “red line” against Assad’s use of chemical weapons. Obama sees this as his finest hour, but in the Middle East, Europe and Asia it was viewed as a dramatic signal of disengagement.

This is not all. According to Mearsheimer, the prevailing strategy “calls for extending the U.S. security umbrella to nearly any country that wants protection as well as trying to spread democracy far and wide.” Here, too, reality differs. To adopt a Mearsheimer metaphor, Ukraine called 911 after being invaded by Russia, but Obama didn’t answer. Pleas for defensive weapons initially were met with offers of blankets and MRE’s (meals-ready-to-eat). As for democracy promotion and human rights, the administration remained mute when millions of Iranians protested the rigged presidential election in June 2009. In addition, budgets for democracy programs were cut, the subject was absent in high-level dialogues with China, and measures to ease political repression in Cuba were conspicuously missing from the agreement to reopen diplomatic relations. And where the U.S. has intervened in recent years, the primary reasons were anything but those of “spreading democracy, especially by force.

What about geopolitics? Here Mearsheimer advocates preventing the rise of regional hegemons in East Asia, Europe, and the Persian Gulf. Fine. These are long-standing strategic priorities. Yet somehow he manages to define away the very real threats from Russia and Iran.  Here too the assumption that Europeans would engage in counterbalancing without the U.S. presence is unpersuasive. Without American engagement, as former NATO secretary-general Anders Fogh and others have made clear, Europeans lack the will and the capacity to do so. As for there being “No looming threat to dominate the Gulf,” Tehran and its proxies already play a leading role in Syria, Iraq, Lebanon, and Yemen, and the Obama State Department continues to name Iran as a leading state sponsor of terrorism. Mearsheimer may not be worried, but Saudi Arabia, Jordan, the Gulf States and Iran’s other neighbors surely are. In this light, “mending fences with Iran” is fanciful. Every president since Jimmy Carter has proffered an extended hand--and none has been genuinely reciprocated.

To adapt a phrase from Daniel Patrick Moynihan, when it comes to rising revisionist powers, Mearsheimer’s approach, through its emphasis on structure, defines deviancy down. In effect, he argues that Russian hostility as well as that of Iran is in effect driven solely by a reaction to U.S. and Western policies. In doing so, he deprives President Vladimir Putin and Ayatollah Ali Khamenei and the Iranian Revolutionary Guard Corps of agency. This is patronizing. It minimizes willful actions, ideology, regime interests, and path determinacy. Indeed, rather than U.S. actions as the driving force in explaining hostile behavior by Russia and Iran, there is a stronger case to argue the opposite: that feckless behavior and retrenchment have actually emboldened revisionist powers to become more assertive and less risk averse – as in Crimea, Ukraine, the Baltic, the Persian Gulf, and the South China Sea.

In the same vein, the argument that if only Washington ends the misguided foreign policy toward Russia that has driven it closer to Beijing, Moscow is “likely” to join the U.S. effort to help contain a rising China is wishful thinking. As leading Russia and China experts such as Gil Rozman, argue, Russia and China share compelling reasons for their tacit partnership including a common sense of national identity that defines itself in opposition to the West.

Finally, there is the well-worn assertion that offshore balancing “coupled with quitting the regime-changing business would also ameliorate America’s terrorism problem.” But the drivers of radical Islamist terrorism are deep-seated and multi-faceted. For example, the late Osama bin Laden’s widely circulated post-9/11 video emphasized 80 years of Muslim “humiliation” and “degradation” at the hands of the West. Yet the al-Qaeda leader’s words harked back to a time when America was largely absent from the Middle East in the aftermath of World War I and the collapse of the Ottoman Empire. For the foreseeable future, the U.S. remains the foremost international power, exemplar of Western values, and sustainer of world order and it will remain a terrorist target whether or not it pulls back from the region. Here it is well to recall Leon Trotsky’s dictum that, “you may not be interested in war, but war is interested in you.”

Mearsheimer is right to conclude that rising China does seek to dominate Asia and that the U.S. should seek to prevent Beijing from becoming a regional hegemon, but the claim that “no country threatens to dominate either Europe or the Gulf” and that this is a “blessing” suggests that his advocacy of realist theory has gotten in the way of a realistic grasp of contemporary world politics.  Adoption of a strategy of offshore balancing would not relieve the United States from the terrorism, wars, and destruction that Mearsheimer seeks to avoid. In the end, the U.S. remains the indispensable power. Its active engagement abroad is essential both for sustaining international order and for its own national interest and security.

Robert J. Lieber is Professor of Government and International Affairs at Georgetown University.  His latest book is Retreat and Its Consequences: American Foreign Policy and the Future of World Order (Cambridge University Press.)