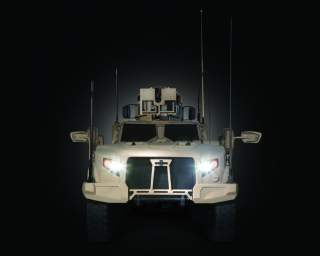 As the Army gets ready to begin accepting deliveries of its new Joint Light Tactical Vehicle, a new fast-moving armored vehicle engineered to take bullets, drive over roadside bombs and withstand major enemy attacks, the service is solidifying plans to incorporate the vehicle into its preparations for massive great power conflict.

As evidence of this approach, Lt. Gen. Michael Williamson, Military Deputy to the Assistant Secretary of the Army, Acquisition, Logistics & Technology, said the multi-year developmental effort of the new Humvee replacement has been focused on engineering a vehicle able to help the Army win wars against a large, near-peer adversary. In a special exclusive interview with Scout Warrior,

Williamson pointed to some of the attributes of the Army’s new Joint Light Tactical Vehicle, or JLTV, as a platform well-engineered for large-scale mechanized warfare. Communications technologies, sensors, computers and extra add-on armor protection are, by design, some of the attributes intended to allow the vehicle to network the battlefield and safely deliver Soldiers to a wide-range of large-scale combat engagements.

he modular armor approach gives the vehicle an A-kit and B-kit option, allowing the vehicle to integrate heavier armor should the war-threat require that.

Another key aspect of the Army’s future strategy is called Wide Area Security, an approached grounded in the recognition that large-scale mechanized forces will likely need to operate and maneuver across much wider swaths of terrain as has been the case in recent years. Having a dispersed force, fortified with long range sensors, armor protection, precision weapons and networking technologies, will strengthen the Army’s offensive approach and make its forces a more difficult, less aggregated target for enemies. This strategic emphasis also incorporates the need for combat forces to operate within and among populations as it seek to identify and eliminate enemies.