Just How Dangerous Is Russia's Military? 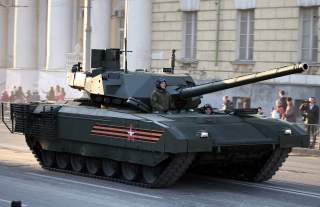 The Pentagon’s Defense Intelligence Agency has released a new assessment of Russian military power—reviving a Cold War-era practice. The agency concludes that the modern Russian military builds upon its Soviet heritage but has modernized its capabilities and doctrine for the present day.

“The Russian military has built on the military doctrine, structure, and capabilities of the former Soviet Union, and although still dependent on many of the older Soviet platforms, the Russians have modernized their military strategy, doctrine, and tactics to include use of asymmetric weapons like cyber and indirect action such as was observed in Ukraine,” the DIA report states.

In the years since the collapse of the Soviet Union in 1991, the Russian military atrophied into a pale shadow of its once mighty Soviet forbearer. While the Soviet Union renounced the first use of nuclear weapons, the new Russia relied upon those weapons to offset its conventional weakness. However, Russia is trying to reduce its reliance on nuclear weapons as it rebuilds its conventional forces and adopts modern precision-guided munitions.

“One of Russia’s biggest hurdles since the dissolution of the former Soviet Union has been its need to rely heavily on its nuclear forces to deter aggression, resulting in its stated willingness for first-use of nuclear weapons,” the DIA report states.

“Russia has been building its conventional force capability along with modernizing its nuclear forces to create a more balanced military. Moscow has stressed development of conventional precision-strike weapons, a critical gap in its inventory, and recently has tested them in combat in Syria, providing it with an advanced non-nuclear capability to impact the battlefield.”

“Russia’s desire to be a leader in a multipolar world and recapture the ‘great power’ status it had in Tsarist times and the latter days of the Soviet Union requires a force capable of deterring aggression, fighting the range of conflicts from local crises to nuclear war, projecting power and employing force if necessary to intervene in conflicts across the globe,” the DIA states.

“Despite an economic slowdown that will affect the Russian military’s timeline for building all of its planned capabilities, Russia is rapidly fielding a modern force that can challenge adversaries and support its ‘great power’ aspirations.”

To support those ambitions, Russia is rebuilding its forces.

“Moscow’s long-term goal is building a military prepared to conduct the range of conflicts from local war through regional conflict to a strategic conflict that could result in massive nuclear exchange,” the DIA states.

Overall, the DIA analysis—like its Cold War-era predecessor Soviet Military Power that was first published in 1981—is hawkish in its outlook. Only time will tell if the DIA’s analysis proves to be accurate, but as we learned after the collapse of the Soviet Union and the end of the Cold War, Soviet Military Power often contained gross exaggerations that were likely the result of faulty intelligence.