Just How Much of a Threat is Russia’s Status-6 Nuclear Torpedo? 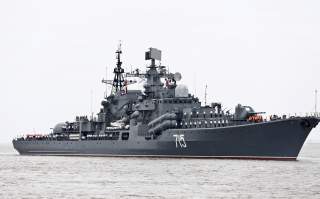 The United States’ new Nuclear Posture Review asserts that Russia’s Status-6 intercontinental, nuclear-armed undersea autonomous torpedo (AUV) is a real weapon and could be a genuine threat. Analysts are divided as to how genuine the threat is.

“It certainly is a threat U.S. forces will need to take into account,” Bryan Clark, a former U.S. Navy submarine officer and current senior fellow at the Center for Strategic and Budgetary Assessments.

“It is large enough to carry a megaton-class nuclear weapon, although the 100 MT weapon they advertise may be too heavy. Torpedoes are generally negatively buoyant due to the weight of the engine and warhead and the lack of space for ballast tanks like a submarine would have. A really heavy warhead in this vehicle would make it difficult to control in depth without going very fast and using control surfaces to stay at depth—like an airplane. I don’t see control surfaces that would enable that approach here.”

If the weapon proves to be feasible, the main concern for Washington is that the weapon would be able to bypass American missile defense systems.

“The main U.S. concern would be that the Status-6 could circumvent U.S. ballistic missile defenses,” Clark said. “It would likely be as noisy or even noisier than a submarine, however, because it uses a small reactor and steam turbine for propulsion like a submarine but has none of the space for sound silencing features like floating decks or extensive sound mounting like a submarine. The U.S. Navy would need to look for this AUV [autonomous underwater vehicle] using similar systems as it does for ASW [anti-submarine warfare], including SOSUS.”

While the weapon would be easily detectable to American sonar, the United States has not fielded good defense against a torpedo like the Status-6.

“The problem then would be how to engage it,” Clark said. “A submarine could be deterred or harassed by active sonar or unsuccessful torpedo attacks. The Status-6 would not respond like a submarine crew, though, and would just keep going until physically stopped. The U.S. has not deployed good UUV-stopping weapons or technology yet.”

The Status-6, despite being an innovative weapon, is not likely to be an effective weapon.

“Overall, the Status-6 is not a practical weapon,” Clark said. “Unlike a bomber with nuclear bombs or cruise missile that has a human pilot who can be recalled or redirected as a scenario escalates and deescalates, the AUV could be recalled in theory, but could experience mechanical failures or communication outages that prevent its activation or deactivation when desired.”

In Status-6 would not be particularly useful from the standpoint of nuclear brinksmanship. “It is less useful from an escalation management perspective, bombers and mobile ballistic missile launchers provide a way to signal to an adversary that you are escalating the conflict without any irreversible actions,” Clark said. “As an AUV, the Status-6 cannot signal to an adversary except by blowing up or revealing itself in the adversary’s waters – which could expose it to tampering.”

Perhaps most troublingly—if U.S. intelligence is correct about the weapons’ existence—is that the Status-6 warhead could be lost or stolen.

“Deploying a Status-6 with a nuclear warhead would place one of Russia’s nuclear weapons in a position where it could be lost or stolen,” Clark said. “Even with tamper protection, it seems unlikely the Russian government would want a nuclear weapon out of its control, particularly given their concern about escalation management and reflective control.”

Former Soviet and Russian nuclear weapons negotiator, Nikolai Sokov, now a senior fellow at the James Martin Center for Nonproliferation Studies, said that the concept is a relic of the Soviet-era.

“The concept is very old, dating back to days when ICBMs and SLBMs were few, unreliable, and vulnerable,” Sokov told The National Interest. “In this day and age, it would be difficult to see much value in a 100-MT slow vehicle. When the slide was accidentally shown on Russian TV a few years ago, I thought it was a hoax to make US intelligence busy. The big question, really, is how reliable is intel on recent tests. Russia has been actively working on small submarines; I can certainly see them working on submarine mothership that carries small subs that can descent to considerable depths. I just do not see much value in equipping them with 100-MT warheads.”

Jeffrey Lewis, Director of the East Asia Nonproliferation Program at the James Martin Center for Nonproliferation Studies, suggested that the slow-moving torpedo would be used to target coastal targets such as naval facilities. “It would detonate in a port—could be used to target naval ships or just to hold urban areas like New York at risk,” Lewis said. “I think we could build defenses against it, yes, although I am not sure how effective they would be. It should be easier than intercepting a missile, for sure.”