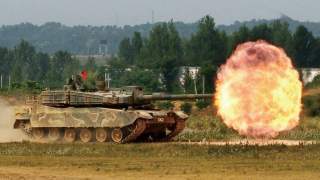 The tank’s fire control system is a technology transfer from France’s Thales, so it is likely again using some Leclerc technology. As an advanced fire control system it is highly automated so even Korea’s conscript crews can learn it quickly. Once a target is acquired, the gun and turret can automatically track it without further human intervention. The K2 can also ford rivers up to 4.2 meters deep via a snorkel kit that doubles as a “conning” tower, something the Korean army learned from the 35 T-80Us it acquired from Russia back in the late ’90s.