Keeping America’s Mighty B-52 Bomber Lethal for the Future 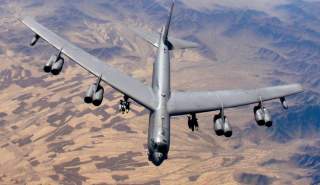 The technical structure and durability of the B-52 airframes in the Air Force fleet are described as extremely robust and able to keep flying well into the 2040s and beyond – so the service is taking steps to ensure the platform stays viable by receiving the most current and effective avionics, weapons and technologies, Eric Single, Chief of the Global Strike Division, Acquisition, told Scout Warrior in an interview.

“Their structure, service life and air frames are good until around 2040. They are built very strong structurally. This is not a structural modification, but upgrades to the capabilities and the avionics,” Single explained. “You are taking this old structurally sound airframe and putting modern avionics, modern communications technology and modern weaponry into it.”

Known for massive bombing missions during the Vietnam War, the 159-foot long B-52s have in recent years been operating over  Iraq and Afghanistan.

The Air Force is also making progress with a technology-inspired effort to increase the weapons payload for the workhorse bomber, Single added.