Khamenei’s Iran is Not Mao’s China 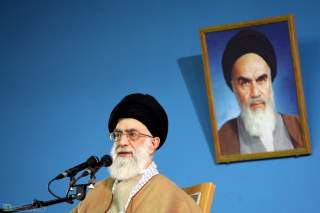 “The lesson of history is that there is no lesson,” Jacob Heilbrunn writes in The National Interest, quoting the British scholar Alan John Percivale Taylor’s warning against erroneous historical analogies. A case in point is “Congress and Attempts to Kill the Iran Deal,” by Paul Pillar, also in TNI.

Pillar likens President Barack Obama’s overtures to Tehran with President Richard Nixon’s opening to Red China, and AIPAC with what was then known as the China lobby supporting the Nationalist regime in Taiwan. The “saboteurs” in Congress are presented as culprits, then and now.

There may be similarities between the wishes of the United States to disentangle from Vietnam in the 1970’s and the Middle East of today. However, the fundamental problem, both with Dr. Pillar’s analysis, and more seriously the Obama administration’s overture, is that Supreme Leader Ali Khamenei’s Iran does not resemble Chairman Mao Zedong’s China.

While Chairman Mao considered the Soviet Union, rather than the U.S., as the greatest threat to the survival of his regime, Khamenei constantly and consistently depicts the United States as the main enemy of the Islamic Republic, and the puppeteer of domestic opposition to his rule.

Addressing commanders of the Islamic Revolutionary Guards Corps (IRGC) in September of last year, he explained his concept of “heroic flexibility” which authorized President Hassan Rouhani to engage in nuclear negotiations with the U.S.: “A wrestler who sometimes shows flexibility because of technical reasons, should not forget his opponent.” In other words, under the weight of the sanctions regime, Khamenei made a tactical shift but did not change strategy.

It’s also worth noting that the U.S.-China rapprochement came at a time when the Communist regime already possessed the nuclear bomb, and its military ambitions would not clash with American policies for nonproliferation. In the case of Iran, the Islamic Republic’s nuclear ambitions are likely to remain a constant source of tension between the two states.

Another point that Pillar overlooks is that the U.S. and China normalized relations at a time when Chairman Mao was the undisputed leader of his vast empire. The Cultural Revolution had purged potential critics or opponents of the strategic reorientation of the Communist regime. Supreme Leader Khamenei, however, is less supreme than his title suggests, and is more pares than primus. He is caught between technocratic elites of Rouhani and former president Ali-Akbar Hashemi Rafsanjani, who advocate temporary nuclear concessions in return for sanctions relief, and IRGC commanders, who oppose concessions and demand the bomb.

Khamenei depends on both groups: He needs the technocrats in order to secure the economic survival of his regime, and the IRGC in order to suppress the domestic opposition to his rule. This is why Khamenei is oscillating between the two pillars of the regime, supporting Rouhani’s nuclear negotiations in every other speech, and the Guards’ defiant line in every other.

The Nixon administration’s opening to China caused grave concern among close U.S. allies, including Taiwan, Japan, South Korea and others. However, at the height of the Cold War, the triangular diplomacy secured a fairly peaceful balance in East Asia as the U.S. disentangled itself from Vietnam.

Khamenei is not Mao. Obama is not Nixon. And Pillar could learn a few things from Heilbrunn and Taylor.

Ali Alfoneh is a senior fellow at Foundation for Defense of Democracies. Follow him on Twitter: @alfoneh.