Killers in the Sky: The 5 Most Lethal Combat Aircraft Going to War in Syria 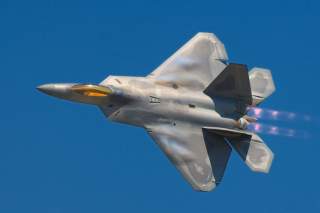 The air war over Syria has seen the combat debut of some of the most advanced warplanes from around the world. No less than three new fighter types from the United States and Russia have dropped weapons in anger for the first time. But those new jets are accompanied by their older stablemates, which are often the mainstays of the war on both sides.

Indeed, the bulk of both jets that were developed during the 1970s are flying most of the sorties in both the Russian and American air campaigns. But while tried and true Sukhoi Su-25 Frogfoots, Su-24 Fencer, Lockheed Martin F-16 and Fairchild Republic A-10s are doing most of the work, this article will focus on the most advanced jets in the theatre.

The Lockheed Martin F-22 Raptor is bar none the most advanced combat aircraft flying over Syria. Designed as a high-flying, supersonically cruising stealth fighter that would annihilate the Soviet air force over the Fulda Gap during a Third World War, the Raptor has yet to fire a shot at an enemy aircraft.

Instead, the mighty Raptor has been used as a high-speed strike platform that can hit targets with near impunity. Moreover, with its high altitude and powerful array of advanced sensors, U.S. commanders are using the F-22 as a flying intelligence gathering and command and control platform. While its designer had never anticipated the Raptor would be used in such a manner, its capabilities in that role have been apparent since the first U.S. Air Force operational testers got a hold of the jet in 2002.

But even if the Raptor isn’t shooting enemy jets out of the sky, the aircraft is proving extreme valuable over Syria.

Developed from the proven two-seat Boeing F/A-18F Super Hornet, the EA-18G Growler is a dedicated electronic attack aircraft that is designed to disrupt enemy radars and communications. It is a role in which the Growler excels with its powerful array of sensors including the ALQ-218 wideband receivers and ALQ-99 jamming pods. Not only does the Growler protect other aircraft, it also provides electronic warfare support to U.S. and allied ground forces by disrupting enemy communications and even bomb detonators. It’s also armed with AGM-88 and AIM-120 missiles to suppress air defenses and protect itself from enemy warplanes.

But the Growler is still a relatively new aircraft. In the coming years, the aircraft will become even more capable with new Next Generation Jammers that use active electronically scanned arrays (AESA) that incorporate Gallium Nitride-based transmit receiver modules that offer an order of magnitude better performance. The new pods will also incorporate cyber-warfare capability.

Additionally, the Navy is equipping the EA-18G with new high-speed TTNT datalinks so that groups of three Growlers can passively locate radiating targets precisely enough for a standoff attack.

Russia’s most advanced interdiction aircraft, the Su-34, also made its debut over Syria recently. Originally conceived during the last decade of Soviet rule, the Su-34 was designed primarily as a replacement for Russia’s increasingly decrepit fleet of Cold War-era Su-24 Fencer strike aircraft.

The Su-34—taking full advantage of its Flanker lineage—is provisioned with a formidable air-to-air self-defense capability. In addition to short-range R-73 high off-boresight dogfighting missiles, the Su-34 carries the long-range radar-guided R-77 air-to-air missile. That means like its nearest Western equivalent, the Boeing F-15E Strike Eagle, the Fullback is able to conduct “self-escorted” strike missions. It also has an unorthodox rearward facing radar to warn the crew about a threat approaching from behind. While the Su-34 is capable of air-to-air combat in an emergency, the Fullback is a strike aircraft. The aircraft has a roughly 700 mile combat radius on internal fuel but is provisioned for aerial refueling with a probe and drogue system.

The jet seems to be performing well over Syria.

Designed for the Russian air force as a multirole fighter to complement the Sukhoi Su-35S Flanker-E, the Su-30SM is primarily being used as an air-to-air fighter in Syria to escort Russian strike aircraft. But the aircraft does have a potent air-to-ground strike capability because it was derived from the Su-30MKI Flanker-variant that was designed for India. While the Russian-model indigenizes many features and improves on the avionics, the jet retains its strike capability even if it is currently being used as an air superiority fighter.

The Su-30SM is built around its massive Bars-R passive phased array radar—which is an improved version of the Bars radar found on the Indian MKI variant. The Russian variants also deleted many foreign components built in Israel and France, but it does retain a French wide-angle head-up display.

However, with European sanctions starting to bite, Russia does not have access to some of the advanced electronic components it needs for its latest jets—one of the pitfalls of a global supply chain. The French HUD will likely be replaced with the Russian-built system found on the Su-35 in the coming years.

The French-built Dassault Rafale rounds out the most advanced jets operating over Syria and Iraq. Developed in the 1980s as a replacement for the Mirage 2000 fighter, the Rafale serves in the French air force and navy. Unlike its Mirage 2000 forbearer, until recently, the Rafale was not much of an export success—but that’s starting to turn around. The problem for Dassault is that the jet is expensive—largely due to France developing most of its own national systems.

While some who have flown the Rafale have criticized it for being somewhat underpowered, the jet is very capable. Like the Russians, the French use a passive electronically scanned array radar called the Thales RBE2, but that will eventually be replaced with an AESA. Production of the new AESA equipped variant has already started.

The Rafale is also equipped with an excellent electronic warfare system called the SPECTRA. The system is reprogrammable and very effective—even against certain export models of the S-300 (single units—not an integrated network of S-300s). It’s also equipped with a Damocles targeting pod—which is being replaced with a new version since it proved to be less than competitive with the Lockheed Martin’s various Sniper pods and the Israeli-developed LITENING family.

The Rafale also comes with a host of French developed weapons. Overall, it’s an excellent fighter.