In Korea, the Same Old Tricks from a Brand New Kim 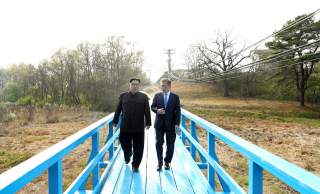 North Korea long ago mastered the art of playing hard to get with American diplomats eager—or even desperate—to make a deal. Pyongyang’s sudden threat to cancel the June 12 summit in Singapore shows that Kim Jong-un has learned how to play the same games as his father and grandfather. The question now is whether the White House will call off the charade or whether it will allow hope to triumph over experience as Pyongyang slowly entangles the United States in a process that undermines Donald Trump’s maximum pressure policy.

While its tactics are familiar, North Korea’s motives are not entirely apparent. One possibility is that the purpose of its threats is to extract concessions before the real negotiations even begin. In effect, Pyongyang wants the United States to pay for the privilege of talking, a mistake often made in the past by Seoul and Washington. A second possibility is that Kim Jong-un finally realized that the United States is dead serious when it says that it will settle for nothing short of “permanent, verifiable, and irreversible denuclearization” before the benefits begin to flow. If so, Pyongyang may really want to torpedo the June 12 summit.

The initial North Korean complaint suggested that the country was looking to extract concessions before the summit. The first official statement from the North attacked the United States for “provocative military disturbances with South Korea,” a reference to the annual Max Thunder military exercises that began last week, involving two thousand South Korean and U.S. Air Force troops. If its objection were serious, then Pyongyang could have made it months ago, rather than fueling expectations that a major deal was imminent. Rather, this is a textbook example of how North Korea raises America’s hopes, then invents a pretext to back away from its commitments. The proper response to such a gambit is to call the North Korean bluff and offer nothing but additional sanctions.

However, Pyongyang pre-empted the U.S. response to its initial statement by issuing a second and very different statement just hours later, attributed to First Vice Minister of Foreign Affairs Kim Kye Gwan, a veteran negotiator with intimate knowledge of how his country has manipulated Americans in the past. This second statement suggests that North Korea’s objection to the Max Thunder exercise reflected deeper fears about denuclearization talks.

Kim Kye Gwan’s statement explicitly rejected the precedent of Libya’s rapid and complete denuclearization circa 2004 that National Security Adviser John Bolton cited on multiple occasions as a positive model for a U.S.-North Korea agreement. Despite previous expressions of interest, Kim’s statement rejected “unilateral nuclear abandonment” as a basis for talks.

It also set an unacceptable precondition for denuclearization: the “end to anti-DPRK hostile policy and nuclear threats and blackmail of the United States.” That is code for the removal of U.S. troops from South Korea and for withdrawing the U.S. nuclear umbrella over South Korea and Japan—actions that would damage or end U.S. alliances with Seoul and Tokyo. This is what Pyongyang now wants before denuclearization.

Such demands represent a critical test for the Trump administration. Is it 100 percent committed to real denuclearization? Or has the thirst for a deal and visions of a Nobel Peace Prize led the White House to compromise its strategic principles?

Alternately, if Washington is prepared for a years-long drama in which Pyongyang constantly hints at a breakthrough before issuing ever more demands, then by all means proceed with the June 12 summit.

Anthony Ruggiero, a senior fellow at the Foundation for the Defense of Democracies, was the nonproliferation advisor to the U.S. delegation to the 2005 rounds of the Six-Party Talks and spent more than seventeen years in the U.S. government. Follow him on Twitter @_ARuggiero.

David Adesnik is the director of research at the Foundation for Defense of Democracies. Follow him on Twitter @adesnik.