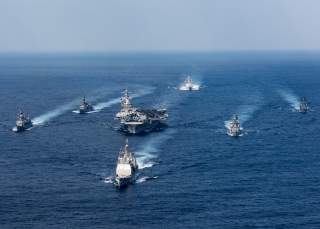 The laser weapon will be developed through a three-phased approach and fire from Destroyers, Cruisers and maybe even carriers. These weapons could quickly incinerate enemy drones, small boats and even missiles

The US Navy is accelerating efforts to incinerate drones, cruise missiles, aircraft, ships and other enemy targets with laser weapons fired from destroyers, cruisers and maybe even aircraft carriers.

While ship fired laser weapons have been in development for a while now, the effort is gaining momentum and focus as it appears to be nearer term than was previously thought possible. Advances in integrated mobile electrical power sources and higher-kilowatt laser weapons have sped up the developmental progress, bringing the raster prospect of high-heat, precision laser weapons to surface combatants.

“I've had the opportunity to travel around the directed energy technology corridor, and from what I've seen, I'm very hopeful. It is clear to me that if we can do this right it will be transformational," Richardson said. "So the Navy's all in, we're pushing this forward. We're committed to moving forward as fast as we can.

The Office of Naval Research has spent time working with Northrop Grumman to develop a Laser Weapon System Demonstrator through three phases; the phases include an initial design phase, ground-testing phase and then weapons testing at sea aboard a Navy Self Defense test ship, a Northrop statement said.

Meanwhile, the Navy has already deployed one laser system, called the Laser Weapons System, or LaWS, which has been operational for months.