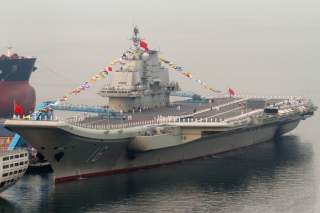 China has all but confirmed that it is building an indigenous aircraft carrier, and that it may even be a nuclear-powered one.

On Thursday, huanqiu.com, the Chinese-language version of the state-run Global Times, published an internal document of the China Shipbuilding Industry Corporation, one of China’s two largest shipbuilding companies. CSIC is a state-owned company.

The report lists building nuclear submarines and an aircraft carrier as the company’s “priority missions.” It also states that progress on these projects has been smooth.

"The priority missions of building the aircraft carrier and nuclear-submarines have been carried out smoothly and with outstanding achievements," the document states, according to a translation provided by Taiwanese media outlets. The same Taiwanese reports go on to say that the document suggests that China’s first homegrown aircraft carrier is likely to be nuclear-powered, without elaborating.

Adding credence to this viewpoint is that this week huanqiu.com also featured promiently a new Russian report that claims that China’s first homegrown aircraft carriers will be nuclear powered. Specifically, earlier this week Sputnik News reported, citing an assessment by Vasily Kashin, an expert from the Center for Analysis of Strategies and Technologies, that “it is known that China plans to build large nuclear aircraft carriers, equipped with electromagnetic catapults. Work on the main units and elements of the ship is already underway, and the project documentation part of it has been completed.”

The Pentagon report goes on to note that compared to the Liaoning, the refurbished Soviet-carrier the People’s Liberation Army Navy currently operates, China’s homegrown carriers “would be capable of improved endurance and of carrying and launching more varied types of aircraft, including electronic warfare, early warning, and anti-submarine, thus increasing the potential striking power of a PLA Navy ‘carrier battle group’ in safeguarding China’s interests in areas outside its immediate periphery.”

China has done nothing to dissuade foreign observers of the view that it is building indigenous aircraft carriers. To the contrary, one Chinese defense spokesperson told reporters that while the Liaoning is China’s first aircraft carrier, it will not be the only one.

Similarly, in January 2014 media reports in China quoted Liaoning party chief Wang Min as saying that work on China’s second aircraft carrier had begun in the city of Dalian, and that Beijing ultimately expected to build four aircraft carriers. These reports, however, were quickly removed by China’s censors.

Assuming it remains online, the Global Times’ publication of the internal CSIC document is therefore the closest China has come to confirming that is currently building a homegrown aircraft carrier.

Notably, the new report comes on the heels of Russian reports that China is exploring different options for forming carrier battle groups. Those reports were reprinted by Chinese state media outlets.