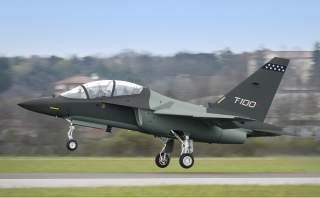 Italian aerospace conglomerate Leonardo submitted its bid for the United States Air Force’s T-X advanced jet trainer program in March. The company will submit its flight data for its T-100 aircraft—a derivative of the M-346 Master advanced jet trainer—by the end of this month. Leonardo is going head-to-head against Lockheed Martin’s T-50A and a new Boeing design that was custom designed for the Air Force contest.

“We feel good about the proposal,” Bill Lynn, chief executive officer for Leonardo DRS—the American subsidiary of the Italian giant—told me in his office in Arlington, Virginia.

“We have been the most successful internationally.”

Lynn noted that the M-346 is already training future F-35 pilots in Israel and it is also in service with the Italian air force, which will use it to train its future Joint Strike Fighter pilots.

Indeed, the M-346 has won four out of the five international trainer contests it has been submitted into—defeating the South Korean-developed T-50 on more than one occasion.

The wild card this time round is Boeing’s new entrant, which the M-346 has never faced-off against before.

“That’s one of the real differentiators,” Lynn said.

Leonardo’s submission to the U.S. Air Force’s T-X program involves more than just the aircraft.  The company is partnering with Honeywell to supply the engines, but more importantly, it is teaming with CAE to build the T-100’s ground-based training system.

“We have—I think—the kind of system that the Air Force is looking for, which is something that is not only an aircraft, but integrated a ground-based training system and has a fluency between the two,” Lynn said.

As the T-X competition has evolved, the program has become a price shootout according to most industry observers.

Indeed, Northrop Grumman—which had designed a new clean sheet design for the T-X competition—dropped out of the program after deciding that it was not worth its effort to submit a bid. Lockheed and Boeing remain in the competition, but Raytheon—Leonardo’s former partner in the T-100 venture—declined to submit a bid. Thus, the Italian company decided to submit a bid on its own using a “lean” structure to minimize costs.

“We think we’re well positioned to offer the Air Force a very good price for this system,” Lynn said.

One of the potential challenges for Leonardo, even though the T-100 is a mature design—is that it is a foreign company. But while the T-100 design might be of foreign origin, the aircraft will be assembled in Tuskegee, Alabama, where Leonardo plans to build a new factory. The plant would directly employ 750 people, but additional American jobs would be created because many of the subsystems are of U.S. origin. Indeed, CAE USA will build the ground-based training system in Florida while the jet’s twin Honeywell F124-GA-200 engines are built in Arizona. Thus, while the T-100 might have been designed in Italy, it will be largely built in the United States.

“The plane will be built in America,” Lynn said. “It will be very American.”

The Air Force will likely select a winner for the T-X program by the end of the year. The initial contract will be for 350 aircraft worth roughly $16 billion, however that is just the initial buy. The Air Force—which will use the T-X to replace its Northrop T-38C Talons—has to replace more than just 350 aircraft. Moreover, once the U.S. Air Force adopts the T-X, other air arms around the world are likely to adopt the new trainer.

“I think there is a reasonable chance that the Air Force might buy more and there is a very, very high probability that you would have substantial numbers of international sales,” Lynn said.

“That’s one of the reasons this competition is getting so much attention.”

Lynn estimates that if Leonardo wins the contract, it could sell as many as 1000 T-100 aircraft worldwide. Thus, it is a potentially very lucrative prize.