Lessons from the Cold War: Why Man’s First Trip to Mars is a Matter of National Security 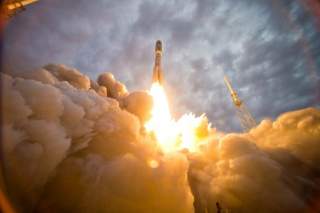 A manned trip to Mars has the ability to captivate the American imagination and produce an emotional connection to and a broader appreciation of space. Harvesting the American public’s appreciation for space—and the technology’s based within it—will be vital if the U.S. is to improve its national security. Without broad public support for increases in space-based national security investments, the U.S. is likely to fall behind strategic competitors putting Washington’s military preeminence in jeopardy. Creating a personal link with the importance of space should therefore be a major priority for policy makers as the U.S. considers a trip to Mars. The Cold War’s space race is proof of this.

The U.S. is in need of broader public support for crucial space-based national security investments and the first manned mission to Mars could be the best opportunity for generating an important personal connection with this essential component of American national security.

Several organizations, both government and private, have made plans to send humans to the Red planet within the next 10-15 years. This would undoubtedly be a monumental event: humans would—for the first time—step foot on another planet. It would signal an important triumph from a broader perspective of humanity’s place in the universe which would resonate with each and every American as they followed along.

Space based capabilities represent crucial components of America’s military portfolio. The United States uses space-based assets for a number of military and commercial purposes. From intelligence and command and control, to logistics coordination and location services, to early warning systems. Space is without a doubt a keystone of American national security. U.S. dependence on space-based assets creates a huge asymmetric opportunity for American advisories as well. This isn’t a secret, however, and countries who wish to challenge the United States are already making similar investments in their own space-based military assets. To counter these threats, the United States needs to significantly increase the portion of its defense budget that is focused on space-based military assets.

Without public support, increasing spending for efforts in space is unlikely to happen. Given the recent cuts in the U.S. defense budget—driven largely by the sequester—it is unlikely the United States will be able to maintain its military advantage without significant budget increases. In (FY) 2000, the national security space budget was $15 billion. Unfortunately, the DoD budget allocation for space efforts has been on a steady decline since 2000, with the (FY) 2016 budget sitting at a meager $7.1 billion. While the United States is decreasing spending on military space investments, countries like China are doing the opposite.

Sadly, the American public has a tradition of a national attention deficit disorder with regard to space and requires the creation of a personal connection when it comes to significant budget increases for space-based activities. During the lead up to the success of Apollo 11, Pew polls showed the majority of Americans supported the U.S. space effort despite its enormous cost. What’s interesting about this example, however, is that the public’s concern and approval of America’s space program saw a steady decrease immediately following the July 1969 Apollo 11 moon landing.

In the three years that followed, television viewership steadily decreased, with the exception of the near disastrous Apollo 13, to the point that moon landings were no longer major news. This was because the country believed it was truly a “race” and once the Apollo 11 astronauts had touched down on the lunar surface and returned safely to earth the race was over. Further, a public opinion poll taken during the space race asked Americans, “if the Russians were not in space, and we were the only ones exploring space, would you favor or oppose continuing our space program at the present rate?” 60.4 opposed, 29% were in support and 10.6% were uncertain. Clearly, the Cold War competition drove public interest in the space program, which the United States was able to leverage for matters of national security.

Today isn’t any different. According to Pew surveys at “no point in the last 40 years has more than 22% of the American public thought the U.S. spends too little on space exploration.” Instead, Americans strongly preferred increased spending on programs closer to home. When NASA landed Curiosity rover (the largest, most expensive, and most technically capable unmanned vehicle to date) on Mars, the live stream could be viewed from most TVs, smartphones, or computers, yet only 3.2 million people chose to follow the event. When looking through the poll data and current events, what seems to be clear is that most American’s understand that some investments in space are important but don’t necessary understand why they are important. There is more than a hint of apathy.

Justifiably, the space domain isn’t something the average American can easily understand. It’s a very complicated and difficult subject: It’s literally rocket science.  The same issue was present during the Cold War where the poll data showed the majority of American’s didn’t understand how the technology required for putting a man on the moon translated into improvements in their everyday lives. During the Cold War, however, the deeply personal connection that the great power competition produced allowed this feeling of disassociation to be overcome. Today, a manned mission to Mars would allow the United States to overcome the same challenge.

A Mars mission is the perfect opportunity with which the U.S. can leverage the initial popular support the mission will garner in order to overcome the apathy associated with investing in space. The trick is finding the most effective way of connecting the dots between the mission to Mars and the need for space based national security investments. It will be crucial that the American people come to understand how important space is to American national security.

With the critical U.S. dependence on space-based resources for everything from smart phone directions, to banking, to military operations and more, the connection to the average American can be made. Unfortunately, the complexity of the topic makes it easily ignored. Herein lies the problem that a Mars mission could overcome: connecting the American people to the science and technology they so deeply rely upon.

The U.S. government and the associated commercial sector should start investing modest resources towards developing public interest in space and a manned trip to Mars. Investments should focus on pop culture like movies and TV shows which are already capable of connecting with an audience. Small investments in pop culture would pay dividends once a Mars mission generates the feeling of personal investment and participation necessary for increases in national security spending. Without the personal connection the U.S. public requires in order to support increased spending in space-based investments, the U.S. will face increasingly large national security risks.