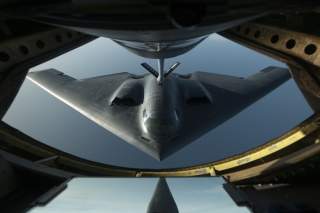 Almost everyone in Washington’s national security circles had expected the two companies to protest the award. As the number of new big-ticket Pentagon procurement programs continues to decline, competition to secure a piece of the pie has become increasingly fierce. Inevitably, a losing contractor team will protest each contract award to the Government Accountability Office (GAO) regardless of whether they have legitimate grounds to do so or not.

“Boeing and Lockheed Martin concluded the selection process for the Long Range Strike Bomber was fundamentally flawed. The cost evaluation performed by the government did not properly reward the contractors’ proposals to break the upward-spiraling historical cost curves of defense acquisitions, or properly evaluate the relative or comparative risk of the competitors’ ability to perform, as required by the solicitation,” the two companies said in a joint statement released on Nov. 6. “That flawed evaluation led to the selection of Northrop Grumman over the industry-leading team of Boeing and Lockheed Martin, whose proposal offers the government and the warfighter the best possible LRS-B at a cost that uniquely defies the prohibitively expensive trends of the nation’s past defense acquisitions.”

Northrop immediately fired back with its own statement. “Northrop Grumman Corporation is disappointed that its former LRS-B competitors have decided to disrupt a program that is so vital to national security,” reads to statement from Randy Belote, Northrop’s vice president of strategic communications. “The U.S. Air Force conducted an exceptionally thorough and disciplined process with multiple layers of review. Their process took into full account the parties' respective offerings and their relative capabilities to execute their offerings on schedule and on budget. Northrop Grumman offered an approach that is inherently more affordable and based on demonstrated performance and capabilities. Our record stands in contrast to that of other manufacturers' large aircraft programs of the last decade. As the only company to ever design and build a stealth bomber, we offered the best solution for our nation's security. We look forward to the GAO reaffirming the Defense Department's decision so we can continue work on this critically vital program.”

Given the classified nature of the LRS-B program and the near total secrecy in which the Air Force conducted the competition, it’s hard to judge from the outside if Boeing and Lockheed have any grounds for protesting the award. However, protests to the GAO are becoming all too frequent. These protests—which effectively stops work on a program even if they are rejected—cost the government and the American taxpayer time and money and it could even jeopardize national security if critical capabilities are delayed.

These days, the GAO requires a filing fee since Congress passed the Consolidated Appropriations Act of 2014, according to Joseph Hornyak, who wrote on this topic for the law firm Holland & Knight. However, the fee is nominal and does not act as much of a deterrent for large corporation. “In the case of defense procurement, however, Congress has given losers the right not only to protest but also the right to hold up the procurement until the protest is ruled on,” former Under Secretary of Defense for Acquisition Jacques Gansler said. “Thus, for the price of a stamp, anyone can initiate litigation over the award of a contract…”

While protesting an award might cost slightly more than a stamp these days, it still very easy for a company to file a frivolous protest. Perhaps Congress might need to step in and change the rules. One possible solution might be to not only charge a filing fee, but also to charge the protestor for the cost of the investigation and for the lost time and added cost to the government for the delay—if the protest is found to be invalid. Moreover, if the protest is found to be completely frivolous, there should be a penalty for filing such a claim. That penalty should be harsh enough to serve as a deterrent to filing a frivolous claim.

Obviously, there must be some allowances for a good faith protest, but a losing bidder needs to be forced to think very carefully before complaining to the GAO.