Lethal Alliance Under the Sea: Why France Is Helping Australia Build Attack Subs 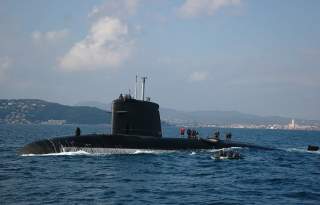 After all of the fanfare and chest beating on April 26 about how 12 submarines will be built in Adelaide: silence. By all appearances—or rather the lack of them—it seems that the Department of Defense is in no rush and little, if any, activity on Australia’s largest naval shipbuilding project is expected until well after the Federal election. Contract negotiations for the detailed design phase haven’t been scheduled and are unlikely to begin for some months.

In the meantime, Defense says that they and presumptive designer, DCNS of France, are building up their Australian workforces, with a strong emphasis on science and technology.

The selection of DCNS hasn’t been without controversy, at least as far as the competition is concerned. TKMS of Germany has been anonymously quoted in the media expressing their displeasure at the decision, feeling that the Competitive Evaluation Process was rigged from the start as part of a plot to move to a nuclear powered submarine. The Japanese have been more restrained, at least publicly, but undoubtedly there are hurt feelings in Tokyo following strong encouragement in 2013 by former Prime Minister, Tony Abbott, to engage with Australia on the future submarine, only then to be shunned.

There are several reasons why DCNS has been selected, but the overarching theme appears to be access to advanced submarine technology. It’s necessary to remember that the CEP was more about selecting a long-term design partner able to help Australia develop sovereign capability than it was about a particular product. The combination of the expertise in DCNS itself, coupled with the French Navy, the highly influential and well-resourced Direction générale de l’armement (DGA), and the military research community is a formidable pool of talent.

One particular area where the French have a technology advantage over the German and Japanese designers is their familiarity with issues around propelling large submarines,having built SSBNs up to 14,000 tonnes displacement. Pushing the future 4,500 tonne Australian submarine through the water quietly at all speeds won’t be easy. While the Germans and Japanese continue to rely on conventional propellers, for their nuclear submarines, France—together with the US and Britain—has moved to pump jet or propulsor technology.

Without getting too bogged down in the technical pros and cons of each, at higher speeds propellers are prone to cavitation—basically water boiling at the edges of the blades due to the enormous pressure being generated—which in turn makes a distinctive noise that enemy sonars are able to detect. While conventional submarines spend most of their time on station at slow speeds—where the acoustic performance of propellers and propulsors is similar—when they do need high speed it’s typically at a moment of crisis. To be able to accelerate to maximum speed silently, while simultaneously turning and changing depth, is a great advantage for a big submarine if it is trying to escape in a hostile environment.

Because of the limitations of propeller technology for large submarines, we can likely conclude that the approach of DCNS in utilizing their access to the most sensitive nuclear submarine technologies gave them a distinct advantage. Put simply, while Germany and Japan are excellent builders of conventional submarines, France is a first class builder of conventional and nuclear boats.

Several commentators, including Peter Jennings, have raised the possibility of Australia eventually moving to nuclear powered submarines and a consensus is slowly emerging that at the very least this possibility needs to be open to discussion. If that does come to pass, having DCNS as part of the team will make an eventual transition relatively easy.

There are a number of other factors that probably contributed to France’s win. While Germany and Japan are planning to move to lithium ion batteries in their conventional submarines, France is leery of doing so. This suspicion of lithium ion storage is shared by the USN and could have had an influence on the decision. Major French companies such as Thales and Sagem are already on the Collins, supplying a number of critical hi-tech items such as the entire sonar suite and the ring laser inertial navigation systems. Those companies have met or exceeded all of their targets for industry development, technology transfer and, in the case of Thales, re-export of sonar technology to France and Britain.

Finally, the French marketed well and positioned themselves to work as cooperatively as possible with the RAN to meet all of their requirements. The conservative approach to pricing the bid adopted by DCNS worked to their ultimate advantage because, as the Collins program has shown, there are a large number of developmental hurdles to be overcome—and that won’t be cheap.