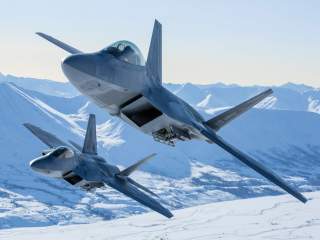 The United States will need forces that are able to defeat to Russia’s anti-access/area-denial (A2/AD) capabilities in the event of a war in Europe. Once those Russian A2/AD capabilities have been breached, U.S. forces would have to move quickly to reinforce allied defenses in Europe as they move eastward.

“We need to be able to rapidly reinforce—that sounds very straightforward. It is not,” U.S. Air Force Gen. Philip Breedlove, commander of U.S. European Command, told the Senate Armed Services Committee on March 1. “Remember Russia has created a very dense pattern of A2/AD—access/area-denial. We need to be investing in those capabilities and capacities that allow us to enter into an A2/AD environment and be able to reinforce.”

Those capabilities would include the stealthy duo of the Lockheed Martin F-22 Raptor and the F-35 Joint Strike Fighter—which are better able to tackle modern Russian-built advanced integrated air defense systems like the S-300 and S-400. Indeed, the U.S. Air Force has started to rotationally deploy the F-22 to Europe while F-35s will be permanently based in England starting in 2021.

“I would love to have both the F-22 and the F-35 in Europe. They are that complementary. But we don’t have no plans nor have we discussed anything about forward basing any F-22s because we do it via a rotational basis,” Gen. Frank Gorenc, commander of U.S. Air Forces in Europe (USAFE) told Defense News on February 26.

Eventually, the B-21—the Long Range Strike Bomber (LRS-B)—might also play a role, but the new warplane will act in a capacity akin to a B-2 Spirit. “I think in the end it will be what the B-2 delivers, only better. More reliable. And the capability of that aircraft obviously with its stealth characteristics opens up a lot of targeting capability. To the extent that they can, I wouldn’t mind seeing some of the improvements in whatever you can do to contribute to the ISR mission,” Gorenc told Defense News. “There are not a lot of details on it to be perfectly honest. But that is what I am expecting for it. I need it to be more persistent. I need it to be more long range. I need it to be mission capable at a very high rate.”

Meanwhile, Breedlove reiterated that Russia continues to ramp-up its undersea activity. As during the Cold War, when NATO worried about Europe being overrun at the same time Soviet naval forces cut the lifeline to the Americas, the renewed Russian submarine activity raises the specter of U.S. forces being cut off from reinforcements in the event of war. “We are challenged to be able to watch all this activity,” Breedlove said. “And the Russians understand the utility of those submarines and have invested heavily in those submarines and it does challenge our abilities.”