'Little Blue Sailors': Maritime Hybrid Warfare Is Coming (In the South China Sea and Beyond) 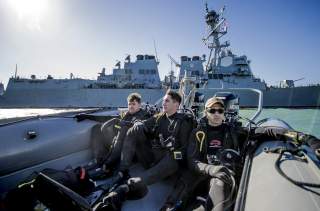 It’s 2019, and an innocent-looking coastal steamer approaches a group of Vietnamese fishing boats in the South China Sea. Suddenly the steamer launches speedboats, which devastate the fishing boats with rockets and machine guns before slipping away. In its wake, it leaves crude mines that damage Vietnamese warships rushing to the aid of the fishermen.

Vietnam accuses China of being the culprit. China denies this, but hastens to add that Vietnam can’t protect fishermen and oil platforms in the South China Sea—yet by coincidence, Beijing can.

Welcome to hybrid warfare on the high seas.

This is the grim scenario laid out by former U.S. Navy admiral James Stavridis. In an article in the U.S. Naval Institute’s Proceedings magazine, Stavridis warns that what he calls “maritime hybrid warfare” is coming, with dire implications for vulnerable targets such as commercial ships, oil platforms and mining rigs.

“Given its need to appear somewhat ambiguous to outside observers, maritime hybrid warfare generally will be conducted in the coastal waters of the littorals,” Stavridis writes. “Instead of using force directly from identifiable ‘gray hull’ navy platforms, hybrid warfare will feature the use of both civilian vessels (tramp steamers, large fishing vessels, light coastal tankers, small fast craft, and even ‘low slow’ skiffs with outboard engines).”

Ships will be manned by “little blue sailors” masquerading as anything from nationalist groups and terrorists to simple vacationers enjoying the ocean. The vessels will be armed with the machine guns, handheld rocket launchers and man-portable antiaircraft missiles that are typical fixtures on small craft deployed by nations such as Iran. Stavridis also envisions them armed with nonlethal weapons, such as laser dazzlers, tear gas dispensers and water cannon, as well as sophisticated equipment used by regular navies, such as sonobuoys and underwater sensors.

Like something created by a James Bond villain, nations could build Q-ships, similar to the World War I and II sub hunters that masqueraded as merchant ships until an unwary submarine approached. They would be “specially designed to look like coastal steamers or other small-to-mid size commercial vessels but that have concealed ports built into their sides for weapons, can launch speedboats from internal bays, and can function as mother ships for even smaller and less sophisticated vessels conducting maritime hybrid warfare,” according to Stavridis. “Such vessels also could surreptitiously discharge mines made in a crude and untraceable fashion to approximate maritime improvised explosive devices.”

Of course, military force is just one aspect of hybrid warfare, a slippery concept that in general is defined as a mixture of regular troops and special forces operating incognito, irregular forces such as guerrillas and terrorists, cyber warfare, fake news stories and pretty much any other way that a state can wage war while denying that it’s waging war. Russia has successfully conducted plausible-deniability warfare in the Ukraine, such as the infamous “little green men,” the soldiers in unmarked uniforms who paved the way for Moscow’s seizure of the Crimea.

“So far, these ideas have been focused on land-based operations, but we are beginning to see them spreading into the maritime sphere,” Stavridis notes. “Perhaps most notably, Chinese activities in the South China Sea and Iranian actions in the Arabian Gulf are starting to show characteristics of hybrid war. This is a worrisome trend, as it has the potential to negate or ameliorate high-end U.S. nautical capability.”

Stavridis also points to North Korean attacks on South Korean vessels, and warns that ISIS is beginning to explore maritime hybrid warfare, potentially followed by other terrorist or insurgent groups such as Al Qaeda, al-Shabaab in Somalia and Boko Haram in Nigeria.

Unfortunately, when it comes to solutions, Stavridis can only provide the usual bromides. Study the problem, share intelligence, work with coalition partners. The sorts of solutions that remind us that trying to figure out which fishing vessel or yacht is really a predator will be a formidable challenge.

Stavridis does suggest that U.S. technology and tactics developed for coastal and riverine warfare will be useful in countering maritime hybrid warfare. But most interesting is his suggestion to use the U.S. Coast Guard, which already has the equipment and experience to deal with the sort of threats posed by hybrid warfare.

If the Coast Guard can handle Colombian cocaine smugglers, perhaps it can handle “little blue sailors.”