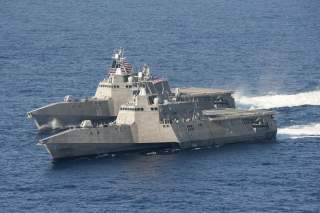 Last week was Nordic Week in Washington DC, with a combined state visit by leaders from Finland, Norway, Sweden, Iceland, and Denmark. This week was Sea-Air-Space, the annual confabulation of the Navy League at National Harbor, Maryland. So there’s no better time to discuss the Royal Danish Navy—or better yet, to criticize a criticism about the US Navy, taken too far. On Defense One this week, longtime think-tanker Lawrence Korb wrote about the “The Lessons of the Littoral Combat Ship” (LCS). The lessons are legion, no doubt, but it’s important not to learn the wrong lessons, drawing a general rule about modularity from the mismanagement of a specific program.

In the early 2000s, the US Navy sought a frigate-sized, shallow-draft ship to undertake a broad range of missions in foreign littoral waters. Two multinational teams—Lockheed Martin and Finmeccanica, and General Dynamics and Austal—won contracts to design and build the Freedom and Independence classes of warships. The Navy frankly oversold the cost at which the ships could be built, and then added cost by greatly altering the design requirements during the process. This was substantially to make them tougher for real combat, but even today, the GAO still doesn’t think that the survivability of the ships can be much improved. Sound quieting of the massive engines, essential for undersea warfare, seems to have been at best an afterthought. In his essay, Korb outlines more problems, but with this one I take exception:

"The second major mistake was assuming that a ship could not only be a minesweeper, but also have anti-submarine warfare, surface combat, and amphibious capabilities. How? The Navy would develop modules that could be placed on the ships rapidly. But rather than being able to rotate the plug-and-fight mission packages in days, it often took weeks or months. By 2012, the Navy admitted that modular changes would be a rare occurrence."

Fairly, hunting mines in a frigate-sized ship might not be the cost-effective solution—unless that ship can carry a whole squadron of remote submersibles, and maybe an LCS can. As Vice Admiral Tom “Distributed Lethality” Rowden has observed, sometimes surface combat capability is just a four-pack of anti-ship missiles. The original LCSs didn’t include that, but they’ll be getting that soon. For a variety of reasons, bad and worse, the Navy's LCS program has been not remarkably successful. Modularity, however, hasn’t been eo ipso the problem. The problem has been the Navy’s particular implementation of modularity.

In contrast, we know it’s possible to get modularity right, because the Royal Danish Navy has been getting it right since the early 1990s. Way back in 1985, Danyard laid down the Flyvefisken (Flying Fish), the first of a class of 14 patrol vessels. The ships were intended to fight the Warsaw Pact on the Baltic—a sea littoral throughout, with an average depth of 180 feet, and a width nowhere greater than 120 miles. Any navy on its waters might find itself fighting surface ships, diesel submarines, rapidly ingressing aircraft, and sea mines in close order. On the budget of a country of fewer than six million people, the Danes figured that they should maximize the utility of any given ship. That meant standardizing a system of modules for flexible mission assignment. The result was the Stanflex modular payload system.

At 450 tons full load, a Flyvefisken is much smaller than a Freedom (3900 tons) or an Independence (3100 tons). Her complement is much smaller too: 19 to 29, depending on the role. At not more than 15 tons, the Stanflex modules are also smaller than the particular system designed anew for the LCSs. But a Flyvefisken came with four such slots (one forward, three aft), and a range of modules surprisingly broad:

- an Otobreda 76 mm gun, for close-quarters battle with ships, aircraft, or missiles

- a launcher for MU90 Impact torpedoes, for killing them

- a command-and-control system for underwater drones, for destroying mines

- an hydraulic crane for launching and recovering boats, or deploying mines

Swapping modules pier-side requires a few hours and a 15-ton crane. Truing the gun module takes some hours longer. Retraining the crew is another matter, but modular specialists can be swapped too. The concept has had some staying power. The Flyvefiskens served Denmark as recently as 2010. In a commercial vote of confidence, the Lithuanian Navy bought three secondhand, and the Portuguese Navy four (as well as a fifth for spare parts). Over time, the Royal Danish Navy has provided Stanflex slots and modules to all its subsequent ships: the former Niels Juel-class corvettes, the Thetis-class frigates, the Knud Rasmussen-class patrol ships, the well-regarded Absalon-class command-and-support ships, and the new Ivar Huitfeldt-class frigates.

In short, 25 years ago the Danes figured out how a single ship could hunt and kill mines, submarines and surface ships. A small ship can't do all those things well at once, but that’s a choice in fleet architecture. Whatever we think of the LCS program, we shouldn’t draw the wrong lessons from it. Why is this important? Modularity is economical, as the Danes have long known. Critically, modularity also lends flexibility in recovering from wartime surprise, in that platforms can be readily provided new payloads without starting from scratch. Because on December the 8th, when you need a face-punched plan, you’d rather be building new boxes than new whole new ships.

James Hasík is a senior fellow in the Brent Scowcroft Center on International Security, where this first appeared.