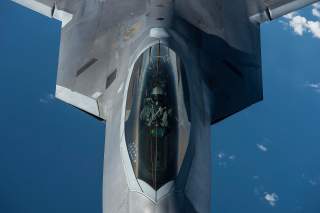 The United States Air Force has awarded Lockheed Martin a new “indefinite-delivery/indefinite-quantity contract” worth roughly $7 billion to sustain the F-22 Raptor through December 31, 2027.

The contract will ultimately be parceled out to Lockheed Martin over the next five years.

“The contract has a five-year base ordering period with work expected to be completed by Dec. 31, 2027,” the contract award reads. “This award is the result of a sole-source acquisition. Fiscal 2018 operations and maintenance funds in the amount of $1,906,535 are being obligated at the time of award.”

This new contract will likely be the first of many such sustainment contracts for the F-22. The Raptor—which first became operational in 2005—is set to remain in service until at least 2060. And given current trends, it is possible the jet will remain in service long than that. Indeed, the Pentagon’s fiscal year 2018 budget request is a down payment towards that goal.

“We plan to retain the F-22 until the 2060 timeframe, meaning a sustained effort is required to counter advancing threats that specifically target its capabilities. The FY18 budget includes 624.5 million dollars in RDT&E and $398.5 million in procurement towards this goal,” Lt. Gen. Arnold Bunch, military deputy to the Office of the Assistant Secretary of the Air Force for Acquisition, and Lt. Gen. Jerry Harris, Air Force, deputy chief of staff for plans, programs and requirements, wrote in their written testimony before the House Armed Services Committee on June 7.

“We don’t have a crystal ball that goes out to 2060,” Tom McIntyre, a program analyst for F-22 requirements at Air Combat Command, told the National Interest earlier this year. “Our organization is working the requirements for the F-22 to keep it operationally relevant for obtaining and maintaining air superiority between now and 2030.”

Nonetheless, based on the threats the Air Force sees becoming operational in 2019-2020, the service is looking at planning future upgrades for the F-22—however those discussions are classified. “Those are classified capabilities,” McIntyre said.