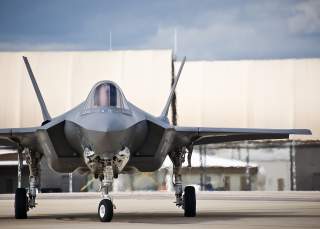 The future is looking bright for Lockheed Martin’s F-35 Joint Strike Fighter, which is set for massive growth as the program finally reaches maturity and enters into full rate production. Indeed, over the past year, the program grew by some 18 percent according to company officials.

“Our F-35 program, during the fourth quarter we met our joint government and industry commitment by delivering the 66 aircraft in 2017,” Marillyn Hewson, chairman, president and chief executive officer of Lockheed Martin, told investors. “This accomplishment represents a 40 percent increase from the previous year as we continue to ramp up production on this transformational fighter.”

Lockheed Martin expects that the program will continue to expand in 2018. “We anticipate this momentum continuing into 2018 and now expect to deliver approximately 90 jets this year, an increase of over 35 percent from 2017 as we continue to progress to full rate production in the next few years,” Hewson said. “To date, we have delivered over 265 planes to U.S. and international customers. We are excited to see the international community embrace the F-35.”

Lockheed Martin’s margins on the F-35 program will continue to improve in 2018, but not as quickly as they did in 2017. “We are guiding towards a little bit lower number in 2018 versus 2017,” Tanner said. “We did have a number of risk retirements on some earlier F-35 LRIP [low rate initial production] production lots that we took in 2017 that at least -- and I will say they were a little higher than what we had planned for in 2017. And so while we have planned risk retirements for F-35 production in 2018, they are not at the same level as they were in 2017.”

Lockheed Martin’s projections are somewhat conservative and the company hopes to beat its estimates. “We have opportunities, as I always say about this time of the year, to do better than what we are planning,” Tanner said. “The planning right now is just for a lower level than that. That’s driving it, I will say more than the mix of programs on the F-35. And the one thing that may is not true about what I just said is we are hopeful that there will be a TX or the APT [advanced pilot training] program, the pilot training program for the Air Force, announced later this year. That will have a slight dilutive effect on the overall margins because it starts kind of slow as a program to begin with, especially if it's later in the year 2018. But that has a slightly lower, not slightly lower, quite a bit lower starting margin than our other programs within aeronautics.”

For Lockheed Martin’s aeronautics business, the margins of the F-35 program largely mirror the fortunes of the entire division because the nearly $400 billion Joint Strike Fighter effort is so large in comparison to the rest of the company. “You should think of the F-35 now is about on par, margin wise, with the overall Aeronautics margins as a whole,” Tanner said. “And that’s in part because the F-35 program is simply becoming so big relative to aeronautics as a whole.”