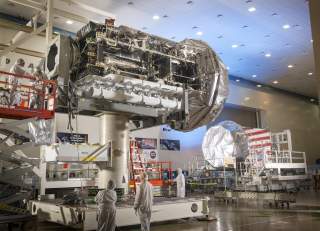 MUOS is a secure satellite communication system that, according to the Department of Defense’s contract announcement, “supports a worldwide, multi-service population of users, providing modern netcentric communications capabilities while supporting legacy terminals.”

Specifically, the network bolsters the DOD’s communication capabilities by offering two payloads: one supporting the faster Wideband Code Division Multiple Access and another that retrofits the legacy system -- ultra-high-frequency satellites that power the Ultra High Frequency Follow-On -- to these updated standards.

Lockheed Martin Space Systems, a subsidiary of its holding company, has been the primary MUOS contractor since 2004. It signed the project’s initial $3.3 billion contract to construct “a next-generation narrowband tactical satellite communications system that will provide significantly improved and assured communications for the mobile warfighter.”

The fifth and final satellite launched earlier this summer. According to Lockheed Martin launch announcement, “the MUOS network will provide users with 16 times more communications capacity than the legacy system it will eventually replace.” MUOS-5 joins four other satellites and four ground relay stations as the essential nodes in the Navy’s communication system.

Work will be performed in Arizona and California and is expected to be completed by November 2018. No Navy funds will be obligated at the time of award. Contract funds will not expire at the end of the current fiscal year. Efforts will be incrementally funded with weapons procurement; research, development, test and evaluation; and operations and maintenance funds.

The Space and Naval Warfare Systems Command is the contracting entity.